Surgical failures. Stitch zombies. Unfortunate undead. And so on. I told you I was doing these and they finally got done. The basic template I did at the same time as I started the brine zombies, seeing how many zombie-poses I could do (the answer was two, at which point I gave up and started drawing barnacles). 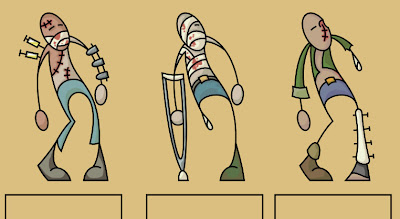 I'm sort-of happy and sort-of not with these. I suffered a bit of block, which was nice to overcome, but they don't quite look battered enough. Especially Charlie. I think I've done all I can with linework - any more and the open areas will be overwhelmed - so that leaves colour. Maybe bruises? I could do a little good by swapping Charlie's head with one of the bandaged ones. I don't think the cartoonish flat shading helps here either

Still, I'll keep pushing on. Better is the enemy of done. I can always go back. Or, more likely, start over with the benefit of having failed once already.

A lot of these recent guys have been made in the service of an idea. Which is not how I started doing things. It's been sort-of good and sort-of bad. It's different, which is useful. On the one hand it gives me something to aim for. On the other, I seem to lack a lot of the inspiration that gets me through the less planned-out ones. There's some electrokinetic "psiborgs" (who need a decent name) that seem adequate, but I felt like I was only going through the motions. They're done - three variants and coloured - but they lack je ne sais quois. Maybe I'll post them if I'm really bored.

I bring this all up, because today I was bricked by inspiration and managed to turn a scribble into something interesting and unexpected to me. I've almost finished vectoring it up, and then I'll have some fun with colours that aren't hospital-blue or dead-fish grey. I'll get some saturation going.
Posted by Lorc at 7:45 pm