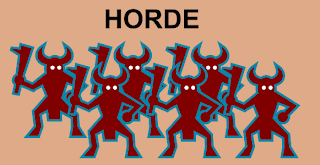 Summoner is a cross between Illusionist and Horde. A Summoner monster does not spawn with any minions. Instead it summons a pack of spectral minions. The summoner will continue to summon minions every now and then, so players will have to fight through a constantly regenerating meat shield. You'll have to kill more minions in total than a horde, but fewer at a time.
Posted by Lorc at 10:08 pm No comments: