A friend asked me to make some icons for his Second Life rides and I was in the mood. 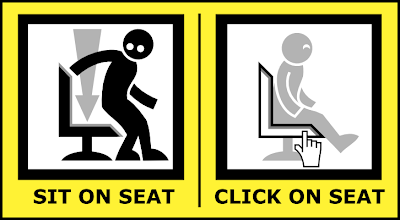 I'm not an SLer myself, so I couldn't tell you why having to sit on the seat is non-obvious, but apparently it was.

My brief was to create two icons which illustrated the concept of "First sit on the seat. Then click on the seat to start the ride"

I'm pleased with the body language of the guy in panel 1. That's some good sittin' even if I do say so myself. I think it's the eyes and the outstretched hand that do it. Plus the off-balance posture and twist of the hips.

The click panel is adequate. He has happy eyes because he's waiting for the ride to start. The chair that you have to click is highlighted, and indented as if it was an icon actually being clicked by the pointer.

The captions were not my idea. If you ask me, the whole point of an icon is to replace text. Giving them a caption is like giving a cruise liner a wetsuit. But he was putting text next to them so I figured I'd at least make a non-ugly icon/text combo.

I wasn't sure if "mesmerist" was a word, but there you have it. "Telepathist" too. Telepathist! I must find an excuse to use that word.In the meantime: hypnotisers (not a word).

I'm trying a quick+easy metallic effect here. Pure white with 50% transparency. It looks... well, it looks quick and easy. Not offensive to me though and I might get better at it in the future.

I'm sure I was thinking interesting things while I made these guys, but buggered if i can remember any of it. Erm, I like #3's lampshade-hat. Also his crystal.

#1's coattails are meant to be hanging behind his legs, not over them. Not sure whether that's obvious. Wow, I am exceptionally boring today. "Ooh I likes the shiny thins and also the lampshade."

Sod it, I'm going to go find some biscuits.
Posted by Lorc at 8:29 pm No comments:

I thought i was done with the jungle natives but here's another one. These guys like to take and carry around some rather grizzly trophies. If the level of detail allowed, they'd probably be wearing strings of ears. Perhaps these trophy takers are the ones that keep the fetish wards all fresh and scary-looking. 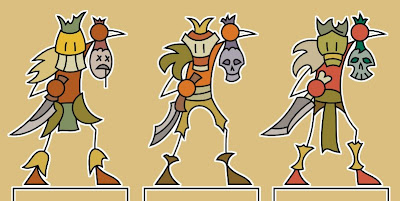 I did a lot of passes on these to get the node count down. Those fur-things on their shoulders were a particular bother. The masks here are pretty simplistic, but I'm ok with that for a bit of variety. I was thinking of monkey island's cannibals when I coloured them, so the one on the left will forever be Lemon-Head to me.

It was difficult to make three different trophy heads. It wasn't long before I gave up and just made two of them skulls - I know skulls aren't meant to have hair, but maybe they're actually dried heads. Besides, skulls look good with scraggly hair. The line coming down from lemon head's trophy is meant to be a string of blood or drool - not sure if that comes across right.

There turned out to be a lot of switchable elements on these guys. Masks, trousers, feet, knife, shoulder and trophy. If I want to keep things under control I'll call the feet and trousers the same element and maybe pair shoulders with masks.

Something else I did recently was come up with some variants for my monster fish-guy. Just head-swaps, but I'm not unhappy with them.

I pondered giving the middle one a dangl- glowy thing - it is meant to be a deep-sea gribbly fish after all - but was happy with its appearance and decided not to overcomplicate things. Shark guy I waffled over; for a while I was wondering whether it looked too much like a monster with a shark-for-a-head rather than a monster with a shark's head.

But yes. Variations. Even if there's no body details I can easily vary without redrawing the whole thing, the head swaps work ok. I'm calling them a success, even if the original is still my favourite.
Posted by Lorc at 7:43 pm No comments: