Simple three-player game. Each player secretly picks a number from one to three, then all are revealed at the same time. Each player who picked a number that nobody else picked gains that many points. Everyone else gets nothing. First to 7 points wins. Would probably work with 4 players too. 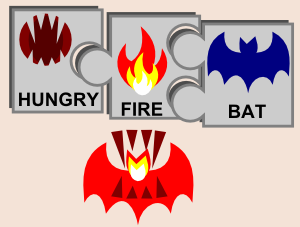 Thinking about a modular roguelike that is expanded by people playing it, which isn't new by any means. Maybe some kind of "deck-building" game where you're a summoner building up a synnergistic horde of minions from prefixes, suffixes and modifiers that you gain as you progress through the dungeon. If you reach the end of the game, then your "deck" becomes a blueprint for a dungeon floor. ie: come up with a good ice "deck" and maybe the next player will have to travel through an ice level populated with those monsters.

Or maybe the visuals are the customisable part? Make a card game ala magic that starts out with all the cards blank, but players get to draw their own art as they play, slowly collaboratively illustrating the game. After playing a round you're presented with 3 different illustrations for the same card and you vote for your favourite. The exact voting mechanism will be a bitch to design, but it's one hell of a gimmick that is sure to garner public attention from game sites.

Inspired by Star Guard, a 2d scrolling shooter where you die in one hit but have infinite lives. A meatgrinder of a war where wave after wave of disposable soldiers with increasingly outrageous prototype guns are sent to the front lines in desperation.  Each life is a new soldier and carries a new experimental gun. You are given brief uninformative instructions on your weapon when you spawn. Some will be useless in the situation where you are, others will be overpowered, others will be suicidal. Short bursts of discovery and fun, where every failure is a new opportunity. Grenades that bounce unpredictably. A fantastic plasma gun that kills you if it overheats. A super-rocket that only has one shot, leaving you unarmed afterwards. A boomerang gun whose shots you DO NOT want to catch. A nuclear grenade launcher whose blast radius is greater than its maximum range. All mixed in with varied but more mundane weapons.

Labels: gamewank, too many words

I enjoy Supreme Commander 2 a lot. Many people say that the first Supreme Commander is much better, but I am not one of them. Still, sometimes I get bored of SupCom2's range of experimentals, and coming up with concepts that add something new to the game seemed interesting. So I did. I probably came up with a few too many actually, so I had to divide them into categories.

Also I sketched some pictures, which aren't very good, but everything's better with pictures.

Cybran "Betelgeuse" experimental anti-matter reactor
Late game it can be hard to find room to build more power generators. The reactor generates vast quantities of energy with a much smaller footprint than an equivalent quantity of generators. Defending it is much easier, but it's an all-or-nothing proposition and (of course) it explodes with nuclear force if destroyed.

UEF "Butler" experimental supply relay
Borrowing a little from SupCom1's adjacency bonus, this building improves the efficiency of all buildings in its considerable range. Units and buildings are constructed faster and structures produce more mass/energy/research. Rather than a super-resource building, the UEF gets to make its existing ones more useful.

Aeon "Paragon II" experimental mass generator
Shamelessly "inspired" by SupCom1. After a huge upfront cost, this generates mass resources from thin air. Won't single-handedly prop up your economy like in SupCom1, but neither does it explode.

Cybran "Impaler" experimental railgun
Fires superheavy metal spikes that must be individually constructed. Low rate of fire and range comparable to light artillery, but the high-velocity spike deals massive single-target damage to ground units. Basic units will be destroyed instantly with the spike visibly stuck in their wreckage (and salvageable!). Experimentals must get used to wearing a new piercing.

UEF "Skyguard" experimental missile installation
An anti-air missile launcher with enough range to cover an entire base. It fires guided missile volleys that, once launched, will follow targets outside their firing range. It also functions as an anti-nuke launcher (albeit with regular range).

Aeon "Juvac" experimental power siphon
Fires a beam that deals drains energy and deals continuous damage to a single target, visibly flowing from target to siphon. After X seconds (proportional to the target's capture resistance) the target will be powered down. Until the unit is destroyed, its controller loses energy while you gain it.

Cybran "Skywriter" experimental beam platform
A multi-legged walker with four independent beam turrets which function both as anti-missile and anti-air. Mobile defence for your army.

UEF "Mother bear" mobile support factory
A factory on treads that builds land units and stores them internally. Like the flying carrier and the unitcannon, it builds units faster and at a discount. Only minor firepower, but its two support cranes will repair nearby units.

Aeon "Chelovolt" experimental walking shield
An extra-large mobile shield generator. But don't you hate it when units just walk/fly through your shields? This shield is electrically charged and any enemy units inside it will be struck by lightning. 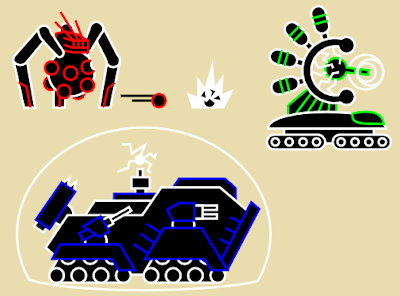 Cybran "Detonator" experimental bomb hatchery
It builds and stores rolling suicide drones that deal medium damage in a large area, but can be destroyed by anti-ground fire before they reach their target. The bombs will roll over water.

Cybran "Honeycomb" experimental MFRL
A basic walker chassis mounting a huge array of hexagonal tactical missile tubes. The missiles all fire in one volley with a long re-arming delay. Long range and dubious accuracy, but barrages a large area.

UEF "Anvil" experimental siegebreaker
A massive brick of a tank, armoured in every obvious way and with a strong personal shield. Very slow, but the most survivable unit in the game. Armed with a battery of short-ranged explosive cannon and a small rack of tactical missiles. Deals less damage at a shorter range than a Kriptor or Colossus, but takes massive firepower to destroy.

Aeon "Soniwa" experimental sonic resonator
A second tracked experimental for Aeon that, like the Pulinsmash, must deploy to fire. When deployed it energises an arc-shaped array. It fires a distortion wave in a long line that damages every enemy along that line. Closer units take more damage. 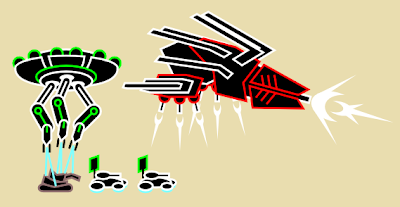 Cybran "Commissar" experimental flying cannon
A gunship chassis built around a medium artillery cannon. Slow, but it outranges all non-experimental anti-air. Its short-ranged secondary batteries defend against ground attack, but it's very vulnerable to fighters.

UEF "Hephaestos" experimental flying gantry
An unarmed flying construction rig that that has the construction power of a commander. Cannot assist factories. Good for quick construction of a forward outpost, or just late-game base expansion.

Aeon "Herbest" experimental reanimator
A tripartite saucer with dangling jellyfish-like legs. It repairs wreckage into units, transforming other factions' wreckage into aeon equivalents. Experimental and structure wreckage is not restored, instead converted into a proportional number of basic aeon units. Can also repair ground units.
Posted by Lorc at 4:57 pm No comments: