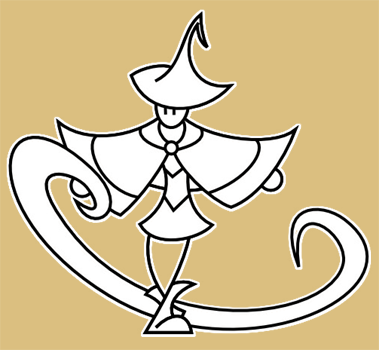 Undecided!
Posted by Lorc at 4:49 pm No comments:

Turned out I was frustrated enough with the poison-pickers that I took another whack at them. Not just colours, but linework too. Number three, the only one I was really happy with had the privilege of remaining unchanged. 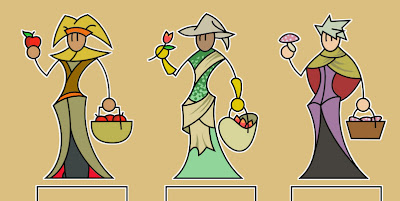 Number two got an extra line or two to make her sash's path a bit more obvious, and raggedied to look less like an apron. And a hat of course. A hat that screams "witch!".

Number one's still a bit dodgy in my eyes. The strange poofy hat is... strange and poofy. But I'm much happier with her mantle and torso now. The colours aren't ideal, but I can live with them.

I even put some extra crease detailing on the cloth. Nothing for number one unfortunately, but I'm much happier with these three as a set. They look witchier to my eyes. Even if you start swapping parts about. I've a feeling you could swap legs and torsos separately; they're not built for it, but it wouldn't be a huge mod. Perhaps even the unique details - mantle, gloves and cloak - could be moved about. Possibilities!

Even with #1 not totally satisfying, I'm content say these are as done as I need them to be.
Posted by Lorc at 9:40 am No comments:

I like the idea of these, but they're somehow bypassing the part of my brain responsible for inspiration. Especially the colours. Drab drab drab. I think I wanted an ecclectic look for the witches but they're turning out too mundane. I need to come up with more distinctive motifs. At the moment they just come out looking like random women.

My thoughts were to give them all something that could be delicious/beautiful or poisonous. Apples are a sleeping beauty thing, you see?

Number one is so brown. What went wrong? And number 2's sash/apron defies human logic. Gah - I'm just moving on.

Bleh. There'll be something salvagable here I think (unlike some of the university wizards which I will no doubt scrap completely) but I don't want to look at these any more right now.
Posted by Lorc at 6:13 pm No comments: