Absorbs energy and stores it internally. They can release some of this energy when they hit someone to create small explosions.
BATTERY

Gains better speed and reflexes the hungrier they are.
FASTER

A cyberneticist who replaced more and more of her body with robotic replacements. Eventually she even uploaded her mind into a computer and replaced her own brain. Her crime-fighting partner can move so fast that the air ignites from the friction. Fortunately he also has psychokinetic control over flame.
FULL-AUTO and RAPID FIRE
Posted by Lorc at 5:06 pm No comments:

Labels: silliness, too many words

I have fixed up my brine zombies. Compared them to the original bunch they have fewer, cleaner lines, tidier colouring and more effective detail. It's reassuring to see that I can now make these kinds of improvements. That I'm better at deciding which details are and are not necessary.

I did wonder whether the torsos of #2 and #3 needed some detail, and I tried to give them some blue waterlogging pattern there, but in the end I think they're better left clean.

A few notable changes I made:
No jackets. Unnecessary extra lines.
Added vertical lines that imply drips or hanging weed.
No variation in trousers and boots. These areas are not interesting or important.
Shrank boots. They were a bit too clompy before. I'm not sure if this is just correcting a mistake in my proportions, or a matter of my style for these characters evolving.

I'm not very happy with the detail layer of the seaweed. I'm not sure what I really want from that texture or how to get it. But I've made such strides everywhere else that I refuse to get bogged down there.
Posted by Lorc at 12:30 pm No comments:

They need a better name. They're another rescue from an old file. The rightmost guy is the closest to my original idea so it's appropriate that he's the least satisfying of them. The other two look far more "natural", while he's just a tentacle-guy wearing a shell. I'm not sure how I should have done him differently.
I hit a block working on the tentacles and had to sleep on it before I could finish them off. The colouring wasn't exactly easy, but there was a feeling of continual progress. I wasn't demoralised by speedbumps or having to redo parts. Maybe that means I'm getting the hang of things.

#2's head-shell probably took the most effort for the least impact. No matter what colour I gave it, it stood out too much. In the end I just gave it the same neutral shade as #1's barnacles, and then reused that on #3's crest as well.
#2's arm was originally drawn as a barnacle. When it wasn't coming together I changed it to an anemone, which was a lot more fun to colour. The tentacle's shading is interesting too, with that wobbly gelatinous shape. Looks sting-y.
Parts: Tentacle, torso (including shoulder), head. Thought about adding something to the legs, but I've learned that it's hard to do meaningful distinctions on legs and feet. The shoulders are so detailed that minor things like belts or shoes don't seem worth adding. 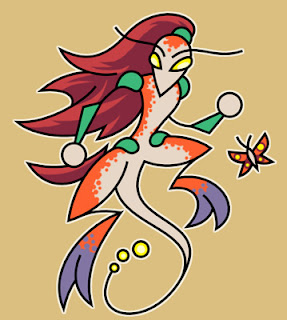 It's some kind of insectile fairy/elf thing.  Nymph is an obvious name. Design is reminiscent of a whole bunch of different things.

The hair's a little weird; the way it has that extra wisp at the end. A little worried it looks like it's holding it in its hand.

Butterfly is cute but possibly unnecessary.

Didn't and don't have much of a plan with this one. I was of two minds as to whether it needed variants or not. I guess I could have done variations on the armour/carapace and hair, but I wasn't feeling inspired in that direction so I just went to the colours.

I like the mottling quite a bit. It could follow the implied depth a bit better, but I'm ok with it for now. Hair's highlights are haphazard.

Clown dolls? What was I thinking. There is no question mark there because I know exactly what I was thinking. I was thinking "I have no fucking clue how to make these interesting. maybe a delicate touch of paint as decoration? And.... now they look like clowns. Fuck it."

Well I went back to them. Improved the lineart and vastly improved the colours. Wooden colours work much better. I stalled for a while, but these magnificent clock-girls gave me the necessary kick in the behind. I  shamelessly sampled their colours for use on these guys.
I love those clock-girls so much. I tried to copy the idea of cut-outs in the legs, but I couldn't make it work here. Might bear it in mind if I do another puppet set.
Posted by Lorc at 7:59 pm No comments: