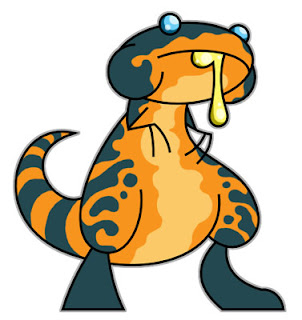 It took me a while to get the patterns on his tail right. I wanted the last stripe to break a little and serve as a trransition to the mottle-y stripes on the main body, but it looked awful. Plain rings on the tail worked better than I'd expected, so I did that instead.
Posted by Lorc at 8:07 pm No comments:

Long story redacted - I decided to try and concept five worlds based on the three-colour "wedges" of Magic's colour pie. It was fun, and I think I did ok.

An endless industrial city, defined by numberless stagnant organisations. Common people are crushed in the cogs of inflexible bureaucracy. The city's overriding theme is law for law's sake, without reason or room for growth.

The hierarchies are so moribund and corruption so rife that only way to advance is through unofficial channels.

Industry is everywhere, but innovation is stifled. Genius is regarded as a dangerous mental sickness and a threat to the city. Not entirely unjustly either - there have been too many practitioners of "wild science" that put their untested theories into practice with no concern for the public well-being.

A full half of the city's gainful employment is involved in law enforcement. The idea of individual prisons has long since been given up on - nowadays entire districts are designated as prisons and blockaded by the city watch. But these are not the most dangerous pllces to be-

When two organisations both try to exert their authority over the same district, the result is chaos. Neither will acknowledge the other's authority and the watch have little official power to interfere in matters of corporate law. The unfortunate citizens must try to survive war by competing architectural development, compulsory employment, contradictory bylaws and no end of other difficulties. The whole morass usually ends when the population are pushed past their breaking point and riot.

The Endless Isles. A volcanically active island chain that girds the planet, impossible to fully chart. This is a world of exploration and adventure, filled with swashbucklers, pirates, giant monsters, eccentric inventors and stunning natural phenomena.People live in ad hoc communities on great floating rafts, united by common purpose or whim.

Creativity is rampant here and inventors and scientists will often find themselves at the centre of a whirlwind of apprentices and hangers-on, eager to share in the excitement and glory.

Most people spend their lives travelling and anyone with a map and an airship will find no shortage of volunteers to join them hunting for treasure, or testing a cutting edge new ship design, or the allure of piracy.

Ape-men are common on the islands - intelligent, but they seem to have abandoned civilisation. Certainly the great stone temple complexes they live in are falling into ruin and disrepair. Everyone has their own theory as to the history of their race and have formed the basis of numerous research expeditions.

Solidei - Death's garden. This world is defined by the cycle of death and rebirth. People spend their lives trying to live in accordance with their karma so that their next incarnation will be one step closer to enlightenment.

Enlightenment is to gain the knowledge of all your prior incarnations and be blessed with immortality. Beings who accomplish this are known as avatars and they are the foremost authorities of the world. These avatars are not necessarily human in form. They can be graceful cranes, wise elephants, coiling snake oracles or any of the other shapes a soul may incarnate into. On this world it is common wisdom to be polite to every animal you see.

Inevitably, some rebel against the natural order and try to escape the cycle of death and rebirth. The vast majority of these are trapped in a hideous half-life as walking corpses or unquiet spirits that infest the uncivilised areas. Some few master the art of extending their own life by draining that of others.

Okay, for this world I didn't come up with much. Something something eternal war? Innovation spurred by constant siege and battle?

Vikings maybe? Valkyries would be cool.

This was the first one I came up with, but the least developed. The world is a huge tropical jungle. There's that there's no stone or metal - all technology is biological. So civilisation is about analysing and adapting the natural world to your purposes.

Some find it easier to work with dead things, others use selective breeding or magical gene splicing. Lots of body-modders. The idea hasn't really flowered in my head yet though.
Posted by Lorc at 9:51 pm No comments: