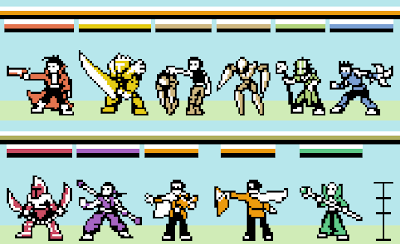 Today I remembered that I made these little pixel guys a few years ago. And I felt nostalgic. So I looked them up and... huh. These are better than I expected. I'd assumed they'd have aged much worse than this.

There's still some lemons of course. The gunslinger was obviously the first onto the page. The gladiator's duff and the aqua wizard is a bit forced. But the puppeteer and the ninja are cool to me and I think the monk is pretty spiffing.

I also found these pixel lixards that I'd forgotten about. That was a typo - I meant to say "Pixel lizards" but I enjoy the portmanteau.  I was thinking about dwarf fortress when I drew these. I also have a sheet of lizards carrying various weapons and tools but it's boring. Courier lixard is best lixard.
Posted by Lorc at 9:34 pm 1 comment:

Not exactly new. These are modified from one of the previous generation of stick figures. One of the better ones, but I was going through another detail-inflation phase so a few parts had to be scaled back.

I thought of the original as a "dragon knight", hence the scalloped armour and weapons. Don't take that too seriously though - they're generic designs. I don't have anything interesting to say about the linework. The colours on the other hand... 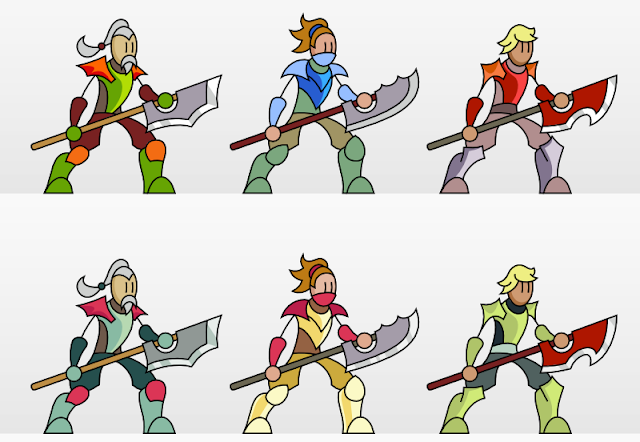 The top row are what I come up with if I have a blank white screen and a default palette. I always slip into default R, G and B. Boring. The green one is ok, but they're all too Lego-coloured.

After getting annoyed by the Lego colours I redid them from interesting-looking colour palettes I found online in places like http://chromaa.tumblr.com and http://www.colourlovers.com/palettes and I'm a lot happier with the look. I wasn't slavish; I kept #3's red weapon for example.

I was deliberately restrained with the shading details. I want to use flats whenever I can get away with it. However I did shade the fleshtones, for the first time. I think that's a big improvement and something I want to keep up going forwards. It fixes a long-running problem I was having with skin tones not looking like human skin because they had no depth of colour. Faces are important and deserve extra attention. I'm still sticking with the uniform oval-shape and line-eyes, but I suspect it's only a matter of time before I give that up for flexibility, expression and character.
Posted by Lorc at 6:28 pm 1 comment: