Turn the light off! 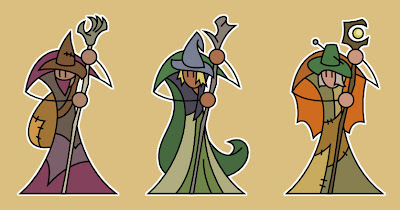 I spent too long trying to come up with alternatives to #1's sack. In the end I just went with varieties of cloak. Shame. A bundle of sticks, or a wicker basket might have been nice but I couldn't make them happen.

The colours are OK. I was trying to strike a balance between naturalistic and colourful. I think that worked out.

I'm getting annoyed with long robes. They're too easy, and I've been doing a lot of them. Must do more legs. Voluminous, baggy trousers.

The pose is OK. It's pretty much what I wanted - a hunched look. They're still more upright than they could be, but I think there was more to be gained by just finishing them off and going for a proper full-body hunch with later attempt.

May do more witches (and associates). I've got an old veep I'm still very happy with that would be a fine young apprentice to any old lady of the woods. Beyond a couple of witch/apprentice variations I think they could do with forest spirit allies. Pixies/sprites or something (will need to come up with a good way to make them look ok in this style). Perhaps leaf/forest golems.
Posted by Lorc at 7:38 pm No comments:

Salt of the earth

More monsters. Conceivably I could expand these into a set, but I don't want to speak too soon. They do have a nice reproducible look though.

The teeth and rocky hide is a bit detailed, but I think I've come to terms with that. Maybe they're related to the rockworm?

As before, being burly monsters they have so much flat space that I need to so some kind of... not exactly shading but, texture? Detail? Interest? Something.

If I do do more of these I can differentiate them with the rocky areas. The one on the right, obviously, would be a boulderfist. Because he has big bouldery fists. The one on the left has a particularly stony appearance so he can be a gravelhide. If I do a big-mouthed one he can be a rockjaw. A lordly one with a crown of spikes will be stonebrow.

They weren't originally clyclopses, just earth elemental-looking things. They had brow ridges instead of eyes, but I needed a good collective name for them so I gave them single eyes and decided that these cyclopses are earth/rock creatures. If I come up with a good name I'll call them something else, but the one-eye thing can stay. I reckon the eyes are semi-precious stone, like jade or quartz.

I wonder if the mouths need more depth.
Posted by Lorc at 4:28 pm No comments:

An idea for a setting. Post-apocalyptic outback-amazons.

The "amazons" are all the output of a slowly decaying cloning plant, set to continuous production by the same malfunction that destroyed the male zygote storage wing. They revere it as their mother goddess.

All with a classical Greece by-way-of Mad Max aesthetic going on. And the ever-fresh high tech barbarism thing. Because of their unique origin, their attitude to technology is confused with religion and child/parent instincts.

They defend their mother goddess from motorised raiders, mutated wildlife and other weirdness.

And of course the title for the whole thing would be Oestralia. 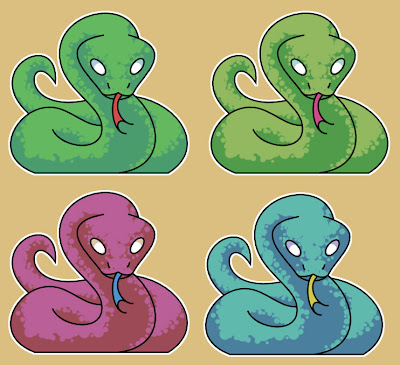 This critter is mostly blank space, so I was forced to use some texture. I think it ended up ok. Only two levels to it, so it doesn't seem out of place next to the flat shading.

Top left was the original. The rest are hue-shifts (obviously). Top right is my favourite, with just the right amount of contrast. Also I never would have picked that colour for the tongue, but it works nicely. Seablue's tongue is also pleasing.

The hue shifts are just me playing around, seeing what looks best. Only the top right snake is the "real" thing. I'm still avoiding palette swaps.

As far as the linework goes, I don't think the snake's body lines up properly. I feel that this should bother me more than it does. I saw a quote recently - "Build it wrong, but build it." I'm doing that.

Trivialities: the forked tongue is squared off. I had to to get the right shape without too many nodes. I'm thinking of changing the corner style to rounded to avoid this. I'll lose sharp points, but I'll be able to use much shallower angles without getting ugly square ends. I suppose I could change the corner style case-by-case, but once I start doing that I'll be varying line widths and who knows where I'd end up.

Arbitrary restrictions. Woo.
Posted by Lorc at 8:47 pm No comments: