Decided those euthanists were shite. Redid them with stronger poses. Much much better. #3's face looks dumb though.

I think these are only about 80% there. They have lots of bits I like, and I'm happy with them overall, but they feel underbaked. Lots of "good enough" in the details that creates an unsatisfying overall impression.

Euthanists. Doctors who euthanise. Obviously I decided that a grim reaper style would be a nice way to convey that these are the death-doctors. It was fun making scythes that looked medical rather than generic reaper. Scalpel-styled steel handles for example. I'm particularly happy with the EKG blade division on #3. Painting them red also worked - I was worried it would look like blood, so I kept it off the cutting edge and did it in obvious geometric patterns.

As part of the reaper look I thought about giving them skull masks, but that pulled them too far from looking like doctors. Plague doctor masks were my compromise, and also made a kind of sense given their role. I also think bird skulls are creepy so that worked well for me. I'd have liked to incorporate some hypodermics in the design, but it didn't work nicely. Shame - lethal injection would have been a cool secondary theme.

A lot of detail here again. I put more on the garments to make sure they didn't look totally out of place behind the fancy scythes. #2's apron for example is something I wouldn't normally do.

I unified the colours more than usual because I think this special role deserves a uniform. I have a mental image of a call going out over the tannoy and, seconds later, one of these guys stalking down the corridors. I figure they have to be badass because they put down the experiments gone wrong. The special forces; the only doctors in the hospital who *deliberately* kill.

So, dark purple robes all round. Still, I made sure they all had teal and crimson details to fit in with the rest of the doctors.
Posted by Lorc at 2:18 pm No comments:

So, more pirates. I think that calling them deckhands might be some kind of reference to their hooks, but I'm not certain. 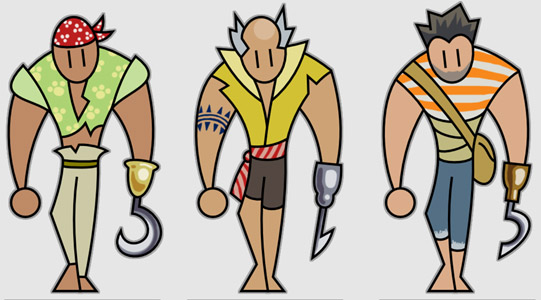 These sit in an odd place. They have an obvious distinguishing feature - the hook - but it's not the overwhelming focus of their design. They're not excessively characterful and so would make good mooks.

On top of that, they have more colour detail than usual. See the linework was unusually open and they looked flat and boring without it. Also I'm still getting the knack of dressing pirates to look like pirates, and what seems to work best is patches of subdued colours with lots of bright detail. The hooks got some special treatment to make them stand out too - though #1's is odd. Also #2's short trousers are awkwardly uneven.

#2 was the first one of these I did, with hair inspired by Tekken's Heihachi. I tried to give him some facial hair but it just wasn't happening. #2 was coloured after Serious Sam. I'm not totally convinced by the ragged fade on his jeans and might scrap it, but the legs needed some spot detail to balance him out. The orange-striped shirt is cute and that hint of purple in his hair too.

#1 is obviously a total badass to get away with wearing a pawprint shirt. I may have been feeling silly when I did that. Same mood as when I gave #2 a shine on his pate.
Posted by Lorc at 9:24 pm No comments:

I was trying to do a new pirate, because honestly so far the pirates have been pretty shit. I think almost all of them need to be redone. And as a lot of my figures do, it turned out looking pretty androgynous. And since all the other pirates are male, I decided I'd roll with it and make the gunslinger a woman.

It's interesting to me that I seem to have settled on hips, thighs and shoulders as the distinguishing characteristic for women. I didn't set out with that as my plan; it was just the path of least resistance.

So as it happens when I was done with them they didn't look much like pirates any more. Far too well-dressed. Maybe they're first-mates or something. Or I might put them in the "generics" folder. Whatever.

Number two has literal hand-cannons, which amuse me. The iron sights on #3's guns are cute, because they're "free" in terms of line count, though they do require an extra node because they break the rectangle.

The gun barrels have three shades - a shadow layer and the usual metal shine. I think that, unlike flat metal, they really need that third shade to give a 3d impression.


Colours took ages to coalesce. #1 was based on a my little pony and it was all downhill from there. The result is three colour palettes I don't usually use. I'm getting more adventurous with colours and I like it. The purplish "highlight" on #2's hair is cute and gives it an interesting texture. I think that's a technique I can exploit elsewhere.
Posted by Lorc at 9:04 pm No comments:

An old design fixed up to a higher standard. I can't remember what inspired this one specifically, but i remember being disappointed that it didn't turn out properly. Well, whatever it was they're ok now. They're not part of any theme I can think of, so they'll go onto the pile of miscellanea.

The detail I'm most fond of #1's scarf. I even managed to exercise restraint with the fold on the hanging piece and leave it to colour detail. #2's fur collar/snood was tricky; I liked the shape but it took a few tries to get a detail that gave it the right texture.

Colouring was hard. It took a real effort to get them nice and bright. #2's palette is a bit of a mess and I don't know how I could rescue it. I'd probably need to start over from scratch on that one. #3 is weird, but in a good way. The base colour of his trousers/sleeves and his tabard-thing is closer than I like two colours to be on the same character, but it worked really well even before the gold detailing.

For the weapons I made sure that they all had a hooked part. I wanted them to be obviously funky polearms without looking like axes.
Posted by Lorc at 9:48 pm No comments:

They need a proper name yet. Scalpel ninja was the concept though. The pose is silly by design. i was pushing for something unnecessarily dynamic and this happened. Not ideal for holding the scalpels though. Perhaps its some ninja rest pose after they've incised somebody. Or a weird martial arts stance.

Incisors would be a good name for them, but then I'd need to rename these guys. It really suits the ninjas though.

Blood continues to be a pain to do. I didn't really want to bloody their scalpels at all. It's all on its own layer so I can clean it easily enough. Yeah, the more I think on it the more I think the blades should be shiny and clean.

I'd like to talk about the scalpels themselves. I took pains to make them look like scalpels and not generic fantasy blades. That's why they're all single pieces of metal. I also differentiated them from my usual blade style by not having a line to delineate the bevel to the edge. The idea is that it makes them look sharper. Also those holes in the blade seem a nice compromise between fantastic and surgical.

I'm fond of the grip details on the hafts. I nearly did those as line detail but I'm glad I left it to the colouring. Similarly, #2's arm bandages. There wasn't enough room to do those with black lines. And now it's got me wondering whether I should have done his head the same way. An awkward middle ground.

I've expanded the colour palette for the surgery theme. That lovely turquoise is still centre stage but I think when I revise the earlier figures I'll use more dark red, buff and that purplish brown.
Posted by Lorc at 10:03 pm No comments:

Obviously heavily inspired by Bioshock's weaponised diving suits. A good idea is a good idea. These seemed a good way to add more body-types to a sailors/pirates theme
I didn't expect to be able to make variations, but it came together pretty neatly. Harpoon guns were a pain though, because the original was rotated at an arbitrary angle that I had to try and match. #2's gauntlets are my least favourite part.

I went wild with the detail layer. Possibly a bit too wild. And that verdigris is... wrong. I like how it looks, but there's no escaping that that's just not how verdigris develops. And it's too intricate besides. #1 was the last one I detailed though and I'd already used up the best ideas on #2 and #3.

I was going to do a boring gem-type shine on the faceplates, but this murky reflection is so much nicer. I'm also happy with the colours. Surprised that I managed to get a nice aquatic-feeling palettes that neither overlap nor diverge too much.

Hmm - should I have given them air hoses?
Posted by Lorc at 1:33 pm No comments: