In the theoretical game I imagine being made with all these pictures, you're meant to assemble a team pokemon-style. I'm doing multiple variations ("skins") when I can, but this raises issues I have with all games where multiple character skins are available.

Firstly it messes with character identification - silhouettes and colour are the easiest ways to ID a character and messing with that takes a toll. It's one of the many things I don't understand about dota-clones: in a game with 50+ different characters, why is anything that makes it harder to ID your opponent a good idea?

Secondly it makes groups look like an explosion in a paint factory. Everyone clashes. Compare TF2 at launch to TF2 now. Pokemon itself doesn't have a big problem here because each pokemon has a very limited number of colours and they all draw on a fairly limited palette. Also you don't see more than 2 of your pokemon on screen at once.

Another part of the problem is that with only three skins per figure, odds are good you can't find one that goes with your existing colour scheme.

So make more skins, or just more colour variations for each skin? That involves lots of work, multiplied across every skin I ever make. I could make it easier by homogenising the palettes, so I have a "the green palette" and a "the red palette" where each colour has a clear equivalent and I can just swap them about with no creative thought necessary. But from prior experience I know this won't work - requiring a colour pattern to look good with every available set of hues is (to put it lightly) not easy. My frontrunner plan at the moment is colour themes. You get to choose the colour theme for your guild and every character skin is tagged to indicate what themes it is compatible with and you only get given skins compatible with your theme. For example yellow, orange, red and brown skins will all be tagged compatible with the "autumn" theme. But yellow would also be compatible with the "spring" theme. I could create new themes in the future and assess existing skins for compatibility much more easily than creating whole new skins.

This strikes me as something that will be harder in practice than it is in theory, but I'd like to at least try it out. A subtle problem with retconning incompatible skins out of the world is that it messes with character rarity - but since that's a system I've barely even thought about, I'm not fussed. There will be ways.

Big issue I see is if it means there are certain characters without a compatible skin for certain themes. To a certain extent I can make sure to create a few extra "night" or "winter"-compatible skins here and there if those themes need more love, but it's still an aesthetic choice with strong gameplay implications.

I'm not sure how I feel about that. First instinct is to run with it and see. I've a feeling it might end up being an interesting feature rather than a problem.
Posted by Lorc at 2:39 pm 1 comment:

Labels: gamewank, too many words, veeps 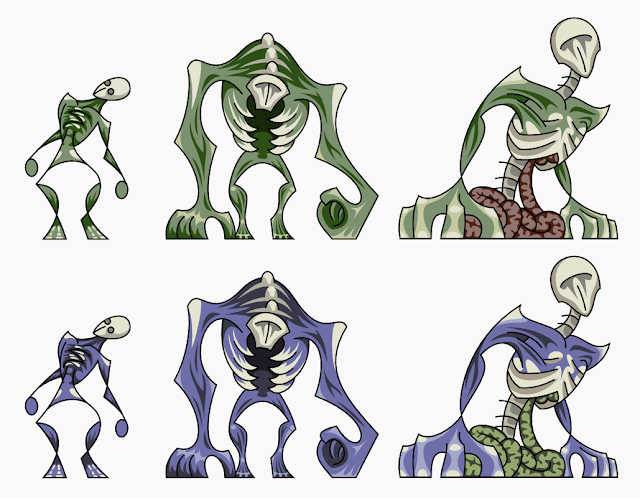 Don't mind me. Just playing around with colouring for the Carrion. Much easier to do this with vector-colours.
Posted by Lorc at 9:24 pm 1 comment:

One of the things I liked in Starcraft was that each race had a siege unit which outranged base defences, meaning that no defence was unbreakable. In practice this didn't matter because investing in base defences would see you overwhelmed by your opponent's massed units anyway but I liked the idea.

I've been playing a lot of Supreme Commander 2, and I much prefer its gameplay to that of Starcraft1/2. However some things Starcraft 2 does very well which SupCom 2 doesn't, is leveraging upgrades to make early-game units relevant in the late game, and keeping units distinct.

These and other things have got me thinking about what my ideal RTS game would be like. I'm thinking a lot about the arms race between units and defences, and late-game obsolescence of early game units. Here's a hypothetical RTS game:

At tech level 1 your only units are raider buggies - fragile, fast-moving units. They're useful as scouts and for killing other raiders. However tech 1 laser towers are super effective against light armour and can destroy many times their own cost in buggies, so much so that a tech 1 rush attack is impossible.

Tech 2 unlocks light artillery units which outrange laser towers and make base attacks possible. Their weapons are only useful against stationary targets, this and their light armour makes them easy prey for raider buggies. This is where you use those buggies you built at tech 1 - taking out enemy artillery or their escort buggies.

Tech 3 is for main battle tanks. These will become the basic attack unit. Their weapon is effective against mobile units and structures, while laser towers and raider buggies can barely penetrate their armour. However this is also when gunships - air units that tanks can't even attack - are unlocked. Light laser towers and raider buggies can attack air (though until now this wasn't relevant) and so they remain useful. Heavy laser towers that can penetrate tank armour are now available, but cannot attack air and are still outranged by artillery.

(Should heavy laser towers be buildable at tech 2? That way you can prepare defences against the tanks before they hit the field, but because there's no air units yet the light laser tower is briefly obsolete. Perhaps light laser towers are individually upgradable to heavy lasers at tech 2, so that even though they're available they're superfluous before tanks appear and you still need to build the lights.)

Now there's a reasonably variety of units on the field and all the basic unit relationships have been introduced. Past that you can have the fun weird stuff that allows for people to be creative and require tactical responses as much as specific counters.

There's still room for expansion if needed. Cloaked units, for example, could give another tier of rock-paper-scissors relationships. If you make light laser towers and raider buggies the only units that detect cloaked units then you've wrung a fourth tier of usefulness out of them, without making them any better in any other situation. (Though I suspect that it'd be getting strained at that point).
Posted by Lorc at 12:39 pm No comments:

Labels: gamewank, RTS, too many words

I've been experimenting with vector colouring. Normally I export the lines into Photoshop and then colour them there. Flood fills under a multiply layer make life fairly easy. I've been getting more and more comfortable with Inkscape though and the colouring jobs I'm doing are getting fiddlier and fiddlier. So I tried a thing.

I think I like it. It means I have to do some things differently - I have to delete line sections that I want to be invisible (I used to just hide them behind white shapes). So it's a good idea to keep a source copy of the linework so i don't have to reconstruct it if I decide to make changes. Not an enormous bother.

It suddenly occurs to me that they look like a Pokémon evolutionary line in this picture. Oh dear.

The long pointy arcs of colour are much easier as vectors, which is handy because I found myself doing those a lot. Other shapes are harder - I wanted to tear my hair out putting the highlights on those intestines. The hulk and the titan have more detail than just about anything else I've done though. I wanted to test it with something meaty (no pun intended).

I've also scaled them differently. I used to use a fixed square as my scale guide, fitting everything inside it. This had the odd effect of making people holding their arms above their heads shorter than people standing upright. I'm now going to allow them to have different sizes as appropriate, and scale human figures to each other. Line thickness will stay absolute, so larger creatures will look like they have thinner lines, and all human-size figures will have the same relative line thickness.

Toyed with making another leap to variable line thickness and maybe even abandoning the flat ground-line, but decided against it for now.  For now. Also pondered giving proper hands to people. Again, not yet...


Oh yeah - the leftmost guy is new. He's a carrion zombie. Zombies are pretty boring, but I felt that this theme needed a human-scale something. I may have felt wrong. He was a valuable prototype though. Working out how to do a human-scale ribcage was a big problem and I'm not sure I've got the right answer yet. I used so much colour detail that the lines are obscured anyway.

I'm not sure I'm going to do more Carrion. They're meant to be ancient skeletons slowly re-clothing themselves in flesh. With strange masks. Not sure where else I could go. Differently proportioned figures? Not enthusiastic yet - these are cool on their own.
Posted by Lorc at 3:58 pm No comments: