At the sketch stage these were a pirate with a cutlass. After the lines were vectored it looked just like he was pulling the blade out from under his coat and I thought that was interesting enough to become the focus of the figure.

If you're pulling a weapon out of your coat, then you were hiding it. Why were you hiding it? Because you're not meant to have it. Who wears long coats and conceals weapons? City toughs! And so Mr Corsair becomes Mr Ruffian and the cutlass became improvised bludgeons.

The idea really cemented itself when I gave #2 that crazy hair. That's when I realised the OTT japanese gangster look was the way to go. #2 has it best with his bare chest and snazzy coat lining, but #3's tied trousers are pretty cute too. I think #1 looks too much like a wizard with that beard and the strange ruff - I'd hoped that the colouring would bring him more on-theme. Even tried going back to the lines to turn the ruff into a scarf, but it wasn't happening. Shame. The lead pipe is my favourite weapon though.

Speaking of which, I like the weapon variety. All things that a good leg-breaker might be carrying.Crowbar obviously coloured after Mr Freeman's, and a disquieting spatter-mark on the truncheon. And it's nifty how that little loop turns a baseball bat into a truncheon - though ribbing the handle helps make it obvious.

The colours aren't terrible, but only #2 feels right. Maybe if I had others so I could make it obvious that they're wearing gang colours? I'm missing a trick here. Not going to dwell. Plenty of time to come back to it if I have an idea.
Posted by Lorc at 5:17 pm No comments:

They hunt swamps? I don't have a clear identity for these guys. They're a revamp of a last-gen figure I'd labelled as a skull-clan archer (#1's head on #2's body is almost the original). They feel like outdoorsmen or survivalists.

Bows are awkward because they put a lot of lines across the torso. This limits the detail that can go on the figure's clothing before it becomes cluttered. Also you really ought to give archers a quiver, which you might notice I failed to do here. I don't have a good justification, I just couldn't find a neat place to hang one.

#1's has kneepads because I liked how they made his boots femur-shaped. That's not a great reason, but it is the reason. When I coloured him I was thinking "chicken".

#2 I consciously dressed up in natural materials, then gave him the compound bow to mess with that. I like his little mantle.

#3 got away from me. He still seems like he needs something more interesting than just trousers. I tried a hanging sash, flowing cloak or loincloth but it didn't stick. And the colouring stage wasn't much easier. I repainted that sash so many times... I wanted the rest of his clothes to be neutral, naturalistic colours so the sash had to be his point of interest. Nothing seemed to work right though. The West Ham-coloured pattern is ok I guess. Maybe I should have tried to give him a better gimmick with the linework.

In contrast to a lot of my recent characters, there's barely any shading detail on these. And I'm okay with that. They didn't need it.

I spent too long writing this and now my tea's cold.
Posted by Lorc at 9:27 pm No comments:

This is a carrion hulk, an attempt at making non-generic undead. Ribcages and facelessness are good visual foci. Especially given how my normal figures don't have mouths - I can go with the flow rather than against it and then have the ribs as surrogate teeth. 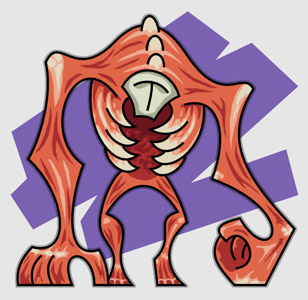 This guy is either the corpse of a giant, or perhaps a monstrous product of necroscientific grafting. The silhouette was inspired by some concept art for Shadow Of The Colossus. I felt really good about the sketch and was genuinely excited to get it finished. It needed some tweaking of course. The legs were originally stick-figure but it looked too much like a person wearing a zombie torso (which isn't a bad idea for a future drawing...) and giving them bulk also gave me room for more muscle detail.

When it came to colouring I was thinking about Shingeki no Kyojin and its giants with their "half-baked" biology. I don't have the chops to match that level of anatomical accuracy, but it was an important inspiration.

I think my colours need to be redone. There's no area on this figure that doesn't have detail shading. That's not necessarily bad, but to keep it in the right style I need to be careful to keep it all sharply defined. The back is looking good (though I should have used more bone-colour instead of light flesh for the ribs coming off the spine). The chest ribs though are far too messy - you can tell that's where I started. By the time I got to the hands and feet I had a much better idea of how to achieve the look I wanted.

The fingers on the right hand are too small. I made a halfhearted effort at redoing the hand to be splayed against the ground, but didn't meet any success. In the meantime I can just about convince myself that they're dug into the ground, or curled up out of view, but honestly I need to man up and fix them.

Still I'm proud of this. It's the most complicated thing I've tried for a while and it turned out better than I'd hoped. Go me.
Posted by Lorc at 4:58 pm 1 comment: