They were going to be crones. You know; maiden, mother, crone? But ended up looking too youthful to be crones. They don't really look like spinsters either. Barely like witches. Unless they're some kind of urban domestic witch.

The linework just wasn't coming together at first. It was missing something. But once i added the bustle it all fell into place. Goes well with the floofy skirts too.

Still, I didn't want them looking like they stepped out of a stately home. A bit of elegance was nice, but it needed to be brought down to earth. That's where the oven mitts and steel toed boots came from.

In fact the more i think about it, the less appropriate "spinster" seems. These are independent non-nonsense young-middle-aged women who have chosen their own way. Not going to bugger about fixing a placeholder filename though.

Colour creep continues. Dot patterns, quilted gloves, mud stains, pleats and embroidery. I may have to tone it down a little - I can't keep up this standard. The mud splats are probably too much. The quilting is necessary though, and the lacey embroidery makes #1. Just loopy mouse-squiggles, but it worked well enough when I zoomed out.

I'm fond of #3's hair. I thought for sure I'd already done that on the swashbucklers but a quick flashback says no. Which is nice.

I'm wondering where these particular ladies fit in the witch taxonomy. They live in the cottages I'm fairly sure. They're the sort that tuts disapprovingly when the apprentice comes in. And they're probably a lot more outsoorsy than they look.

Thinking too hard about this. Maybe it'll feel more natural when I have an obvious continuum of wild -> domestic. And if not, they'd fit in fine at the university.
Posted by Lorc at 9:49 pm No comments:

Wicker men. Very liney; I felt I needed to dump some of the responsibility for the texture on the linework for this one. The basic body shapes are so simple though, even if the hatched lines look more detailed than usual it balances out. And I used the colouring to pick up a lot of slack. 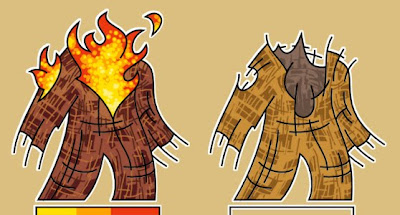 These aren't two alts of the same thing - they'd be functionally different. I started with the burnt husk but I wondered what it would look like with the fire. I don't know which is the "real" one. Fuego is flashier, but I still like the wicker husk. Maybe there's a way to get away with using both.

I'm getting further and further from what I originally felt the witches would be like. These and the scarecrows could well be the foundation of a new set. They may yet work as a "sub-zone", where you start off with all these scary stickly men and then things get leafier and spirit-ier as you progress. Could work. I'm not terribly fussed right now about rigid taxonomies.

The colour texture is a bit bodgy. Wasn't too well thought-out. It's good enough that I don't feel like tinkering further. I like the fire - it looks ember-y. Different to the firefox, but in an appropriate way.
Posted by Lorc at 1:15 pm No comments:

I was thinking, the witches lack low-level fodder. The green man and knight seem too nifty to be rank-and-file. So I wondered about some kind of allied/bound minor forest spirit - faerie or pixie swarms perhaps, or dryads. I had some promising ideas in the faerie swarm direction, but in the meantime I made some scarecrows.

They seem the kind of thing that might patrol the border between the farmlands and the forest. Scary but a little silly too.

At least that was what I thought, but the final things are a bit more Halloween than what I had in mind. Maybe the pumpkin's too much. Pitchfork has my favourite head and I wonder it wouldn't have been better to keep them all having non-head heads. A bucket, or a floppy hat for example.

One of the problems of doing stickmen is how to distinguish things that are meant to be more stick-like than normal. Here I did it with the little bits of branch and the way the limb-lines cross over rather than joining neatly. That combined with the posture and ragged clothes should (I hope) make them obviously scarecrows. Unfortunately that leaves them with a lot of lines and not many areas for colour. At least it makes them distinctive.

Scarecrows are normally straw-stuffed, but that would involve a lot of extra lines to look adequate and I didn't have the budget for it. These are pretty heavy already. Though if I do another type of scarecrow it might be a big plump stuffed or wicker-man type.

Colouring was dull in both senses of the word. I tried, but couldn't come up with any effective textures. Even my tries for a shine on the metal blades looked poor. Decided to leave them with the flats and move on.

Modular bits: Head, torso, legs, boots, each arm. Though I'd probably lump together torso+trous, or trous+boots. And I drew the arms as pairs so I'd worry about the "balance" of them if you mixed+matched. How likely is it that I'll ever get around to actually playing with modular parts? Not very! But it's fun to imagine.

Might do either the faeries or a wicker-man next. Or not.
Posted by Lorc at 6:49 pm No comments: 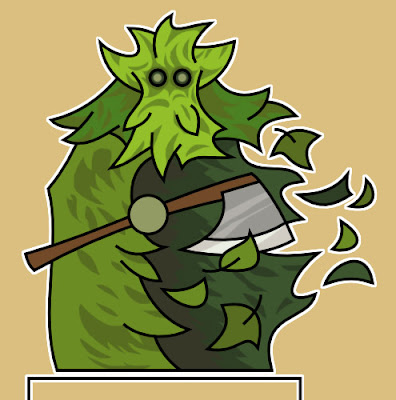 More green for the witches.

I tried to live up to the level of detail on the green knight with this. It was a fair bit of work (as might be expected) but I'm really rather pleased with it. At the moment this guy and the green knight are probably my favourite coloured veeps.

Like the green knight, I was inspired enough that I went straight from vector to colouring. However! Unlike the knight, I then went back and made some variants. Modules are: Head, mantle, Axe, Near cloak+leaves, far cloak+leaves.

However, colouring was so time-consuming that I've left the other two variants white for now. I'd really like to try an autumn colour scheme in the future though.

My thinking when I first sketched the green man was that it was a loyal follower of the witches who dressed up in leaves as a kind of homage. That's why the mundane weaponry. But when I was vectoring it, I hit on the floaty leaf element and decided it would be cool to have him disintegrating into/shedding leaves in the wind. This gives it a more elemental/ethereal look. The axe still works for me because of the English folkloric associations. It could go either way still to be honest.

The variants could be more different. Rearranging leaves is fiddly, but doesn't lead to any huge differences in style. Perhaps I should have gone for some seriously drastic changes - like a hooded head and a deer skull head. But that'd probably be too drastic.

I'm happy with the different axe heads though. I was a little worried they'd be trivial since outlandish ornate axeheads were inappropriate for the concept, but I think I got three different, robust-looking axes.

So yeah, woo. I finish the weekend flushed with success. It feels nice to be inspired, nicer still if it leads somewhere. And I raised the bar on what I can manage with colour. I have three entries for the forest witch bestiary with a fourth ready to be added and two concepts bubbling away in my brain. 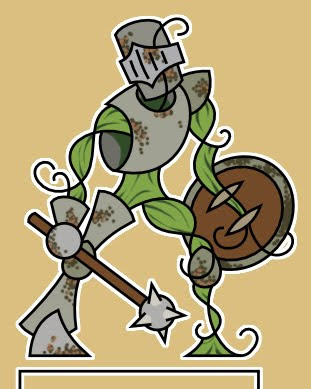 Might try remaking the vine golem with some of the new tricks I learned here. He's too fiddly at the moment and could do with some variants. Something for a rainy day.
Posted by Lorc at 11:23 am No comments:

I may have gone overboard on the highlighting here. I needed to draw more attention to the hands and so I highlighted the fingers and created a transition from fleshy to rocky. To match the others he needed belly and face highlights too. And eyeshine. Altogether that's a lot of shader detail. 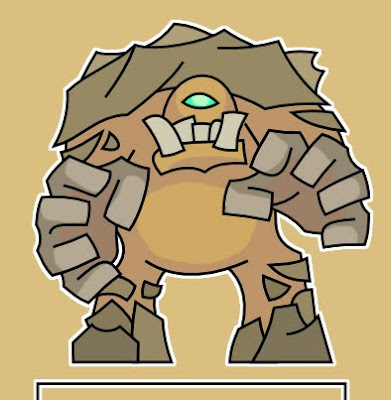 I think he looks ok. The hands are passable, and he's obviously reaching forward, which implies a lot more depth than my usual flat poses.

I think the focus is definitely the hands here - not the solid rocky back. He's a something-grasper. Scree? Crag? Rubble? Cragpaw seems good. OK, so maybe he isn't a grasper.

Cragpaw. Not great, but snappy.

I also discovered a neat trick while playing with this guy - invert the area and then wang the hue slider 180 degrees. You get the same colours, but swapping which ones are the shadows and which are in the light. That could be useful.

His feet are more developed than gravelhide and boulderfist's. The random rock-shapes from gravelhide seem to have turned into something that imply actual foot-shapes. I feel no great need to go back and revise those two to match. Boulderfist's feet in particular needed to be left bare so his arms stood out against them.

In the works is more witchy-stuff. I've an idea for cauldrons, and a kind of green man. Do the woodsmen belong with the forest witches? Maybe!
Posted by Lorc at 1:22 pm No comments: