Gasp! Colour! I didn't expect this, it just sort of happened.

Obviously elemental foxes - fire and unconvincing-ice. I like these. They're not great, but I like them. Probably because, like the crab mutants way back when, I wasn't trying to do vaguely plausible light and shadow, but creating a texture/pattern that provides enough detail on its own.

I am a slave to patterns, so I'll probably try and do some other elemental foxes. I've worked out a tail design for an electrical fox (flickerfox?) but need another pose. If I wanted to be all cheaty I could re-use these two poses and do one of each for each element, but that'd be... cheaty.

On the other hand, variants are basically a no-go here. What could I possibly vary? Tail-swoosh? Head angle? Petty stuff you probably wouldn't even notice.

It's short for "squid magus". Placeholder names are fun, in that they don't have to make sense to anybody but myself. Favourite so far: "psycho cheeseborg". What can I say; it quacked like a duck.

The squagus himself has been in this semi-finished state for some time - I did him during my brine mutant phase. I wasn't happy with him though. Shapeless robe, symmetrical pose and gribbly tentacles. Too easy. Lazy. The only bit even vaguely interesting is the gill-fin-ear shape on the side of the head.

Anyway, today I was squiggling (squiddling?) and I got two semi-satisfactory giant tentacles. I'd always intended to do some giant tentacles for the brine mutants, but... hadn't. Tentacles are both easy and hard to do. They're a very simple shape and vector drawing makes curves a breeze. But they need to have a certain amount of itnerest to be worth doing at all and twisting shapes with a definite cross-section are tricky for me to think around. These are a barely acceptable kludge to me.

To make them match up with the squagus I quickly block-filled them. Those blue-green things at their bases are emant to be water-splashes, like the tentacles are bursting up out of the sea. They're supposed to be the limbs of some huge krakenish thing the squagus has summoned. Possibly even the cult's elder fish god.

Tentacles. Not terribly exciting, but necessary to me. And I'm warming (a little) to the squagus, when he's in their company. Maybe. Ish.
Posted by Lorc at 3:08 pm No comments:

So, colouring is still not really happening. Which is bad. But I'm still puttering along, which is ok.

The pseudo-tiki masks were fun to do. It's a shame that I only do three variants because doing a bunch of different masks could be really fun. Maybe I'll get a chance if I come up with another "native" type. I'm not entirely sure what I was thinking regarding the shape of #3's mask - soemthing about the angle making the fourth corner seem to disappear? Too scared that I'll cause knock-on problems to the face design if I try and fix it.

I had so much fun with the big masks and crazy hair that I had difficulties differentiating them elsewhere. Copped out on the spears - they all have the same head, just different decoration. I was originally thinking I could totally change the weapons so one had a spear, one a sword, one a club (or whatever) but I oculdn't get the pose to work with non-spear weaponry without straying over the edge of the frame.

Also: dinosaurs. Dinosaurs are hard - their body shapes don't like to fit in small square spaces. 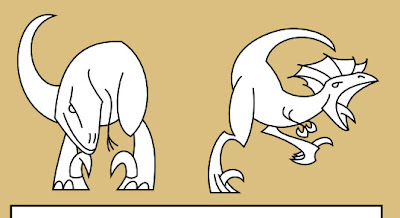 The leftmost one I did a while back. I think I might need to colour him before I can decide whether or not he's worthy - I like the idea of the pose but I just can't judge whether I pulled it off or not. Also he has cheapo mirrored feet, which I probably ought to redo.

Death-chicken was more recent and while I don't like him as much as lefty, I'm happier with him. He also has more fiddly details that I could biddle with for variants - mouth and crest mainly. Lefty's got a nice simple look going, but that limits the possibility for tweaks.

They've both got those dromaesaur claws going on. Now I'm thinking that the left guy would look better without them. Thing is that they're nice easy, identifiable and node-cheap foot detail. Low hanging fruit.

I imagine these dinos live in the same jungle-riverish area as the natives above. Pretty generic I know, but maybe I'll come up with some kind of twist later.
Posted by Lorc at 8:14 pm No comments: