Yet more robed cultists. These ones aren't coastal though. The masks make them look like spider-cultists. Maybe underneath the robes they're even hideous gangly insecty bastards themselves. Who can say. I haven't decided yet. 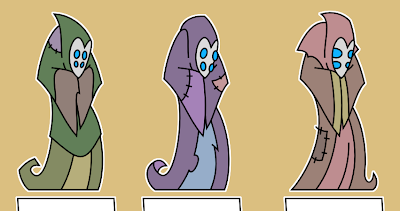 The basic robed cultist outline here is a pretty generic one, and if I decide that I need some generic cultists I may well adapt these guys and just swap the masks for faces.

The colours are pretty wishy-washy. barely any unity across them except the eyes. But since I haven't decided what these mysterious hooded figures are for, this was more like three tries to see what colour scheme might look good than anything serious. Thinking about it now, maybe a sandy-coloured beige or ochre would work, and set them apart from the sea cult with its desaturated greens, blues and purples.

Truth be told they're all, linework and colour both, a bit of a rush job. I've been concentrating so much on the cute little icons lately that I suppose I wanted to prove to myself that I could still do figures. Tomorrow I'll decide they suck and redo them. That's been a productive attitude in the past.
Posted by Lorc at 2:33 pm No comments:

Here's another batch of icons, made much more recently than the others. As you'd expect they're generally a bit more intricate and involved. Detail creep is hard to stop. I've been going back over the old ones every now and then and revising ones that my quality threshold has overtaken though. 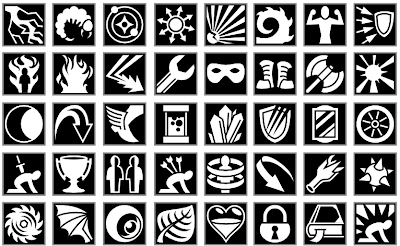 I obviously had TF2 on the brain when doing these. The broken bottle was demoman-inspired (although it may well be appropriate for those grog-swilling bravos). To its right we have a misc spiky ball that just happens to look more than a little like a sticky bomb.

Down the left hand side you'll see that I finally managed to make a backstab icon that I'm happy with. And was so pleased with the new hands-and-knees dummy silhouette that I used it again for a "backshot" icon and, on the bottom right, some kind of" oppressive cold" or "crushing despair"icon. I do like that silhouette, so hopefully I'll find some more uses for it in future. Next I need to make a good running silhouette, maybe based on the ubiquitous EXIT man.

The moon on the middle left is quite a bit simpler than most of these other icons. I remembered an old file of icon-type pictures I'd made before (they were originally intended to be alternate card suits) and adapted most of them. This one resisted any embellishment though - it works for me as is, even if it is rather plain and straightforward.

I'm fond of the half-full glass heart on the bottom row. It's probably the most intricate one I've done so far, and it's tempting to remove the highlights to make it fit in a little more with the others, but I can't bring myself to dowd it down. The book and the eye too are more 3d than most. Must be careful not to raise my standards beyond my ability.

I decided to experiment with colour again for this sampler, and see what it looked like if I "painted" them rather than just using a single flat-fill colour. 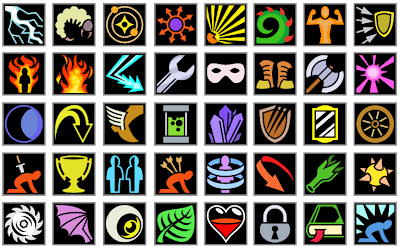 It was a worthy experiment, but I'm unconvinced by the result. Some look nice enough, like the heart and the fires, but others just look wrong. Some of the iconic representations like the backstab just reject any attempt at illustrative colouring and the result is a little embarassing on them. I also tried blurring the lines between the role of the linework and the colouring for the thorns on the top row. Failure.

Also, seen as a group, they just look incoherent and ugly. The single flat colour style complemented each other far better and I thinkI actually prefer even the black and whites over these. There's a few where colour helps make what's being depicted more obvious - the bubbling chemical vat for example, but overall it's not worth the bother I think.
Posted by Lorc at 10:20 am No comments: