I've been vacillating about whether to put this up. It seems a little like admitting that the previous linearts aren't getting coloured any time soon. But, if I'm not then they're not so I might as well keep going with what is getting done.

I'm hoping that I just need something inspirational to jump back on the colour-horse again. In the meantime though it's linearts.

I was really happy with javelineer pose, but the more I look at it the more limp and noodly it looks. Still, it's at least an attempt at something a bit more dynamic - I really don't want to fall into a rut with posing. 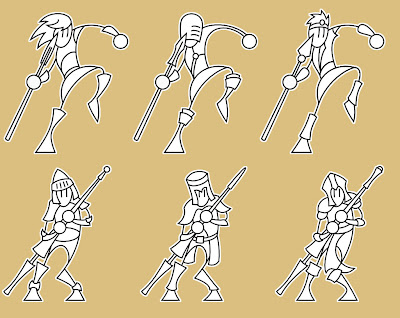 I like the heads; hair continues to be a difficulty but it went ok here. Torsos took ages to detail in a way I was happy with. The funny angle and a lack of space really limited what I could do without it looking cluttered and messy.

The legs are... bothersome. Those crotch-crescent thighs aren't working right, but I can't seem to fix it. I'm calling it done and moving on rather than obsessing though - for all the bits I don't like, overall I'm going to call the javelineers "adequate". They're characterful enough to me that I can let myself overlook the dodgy bits.

Speaking of characterful, I'm very happy with the pose of the squires. Not exactly dynamic like the javelineers, but different and with a sense of motion. Stumbling forward with someone else's weapon and armour.

I like the pose so much I wanted to give them more variation - perhaps a sheathed sword rather than a lance - but I couldn't come up with a third option and this way they're all themed and can go alongside the heralds.

It occured to me that the pose was perfect for soemthing I tried to do when I was paying more attention to the mad surgeon theme - an assistant stumbling forward with a comically large syringe in his arms. Now that I have an idea of the knid of lines that pose needs I could try and do a different version for it, but I also wonder whether I oculd get away with a novelty reskin.

I want new models in preference to reskins, but it seems like an interesting way to do "rare" characters: reskins that completely change the character of the model. It could be kind of cool, or it could be kind of lame. It would add more variety than just an on-theme reskin, and would be an easy way to get a new character without having to make a complete new model. But easy is often a trap. The big thing turning me off the idea is what if the "rare" variant appears alongside a regular? It'll probably look obvious and cheap.

In the works: masked jungle natives and small nippy dinosaurs. Will they make it past sketch? Who can tell!
Posted by Lorc at 10:32 am No comments:

A change of tack

So, I know the name of the game was supposed to be "keep ploughing forward" but that ideal wasn't terribly useful when I was hitting feldspar.

I did the rightmost guy first, using the same block shading method. But I just couldn't summon any motivation to do the others. On the one hand i think I failed to come up with interesting colour schemes here. On the other I might just have OD'd on amateurish block shading. In any case, I tried something different on the other two.

Rather than worrying about light sources, I embraced the flat cartoon look of the veeps and did a sort of graduated fill, darkening towards the bottom to draw attention upwards. I'd pondered using this method at the start, but (lazily) never actually tried it. I'm not sure what to make of the end result, but it was very fast and a fun break. Trying new things is good.

It's not actually a graduated fill - instead it's multiple passes with a low-opacity brush of a different colour (hence the banding). But that's not important. Middle guy I carefully selected the shades to work down to. Leftmost I used a universal grey-purple shadow colour. And as a result the one has no contrast and the other is way too dull and dark. But there might be potential here.

I kept working on linearts while i was trying not to finish colouring the monks. Heralds!

I expected difficulty making meaningful variants, but it flowed pretty easily in the end. The tabard designs were fun and they could look nice with some bright heraldic colours on them.

I think these guys might be part of another themed group like the (neglected) brine mutants and the psycho surgeons. Some kind of knights, squires and chivalry thing. I can think of two acceptable armoured knights I've done in the past that could be purposed for that. I've avoided making variations for old veeps so far because I wanted to be making new stuff rather than going over old stuff, but it remains an option.

Speaking of redoing old stuff - trivia time! The heralds were me idly re-doodling one of the veeps I drew way back when I first started playing around with vector stickmen. Of course looking back now they're all abominable, but there's brain fodder to be had there. The cutthroats from a little while back were another example of trying to modernise one of the original bunch.

I've deviated a fair bit from the original idea. I'd wanted to see how few lines you needed to make something identifiable. Which is how I came up with the basic skeleton pattern. But I've gone the way of packing in more detail instead, with the minimal lines thing being just a stylistic quirk.
Posted by Lorc at 10:17 am No comments:

I've failed at giving these guys a good name. The title above is a placeholder until I come up with something good. They're supposed to be vaguely city-ish unjapanese ninja-ish people. And the one in the middle turned out a bit too John Travolta as a result. I'm not entirely unhappy with him though - he's just a bit weird. Sporadic weirdness is good.

The linework's a bit borderline. The idea is they're drawing those cleaverish swords from where they hang on their backs, but I didn't get it looking right. It might have worked better with an actual visible sheath, slung like a bedroll, but the twisted torsos made gatting a working angle a bitch. At least the legs aren't as bad as they were - until i realised and fixed it, their left knee was roughly three inches below their hip.

Alpha makes me think of white chocolate and raspberry though, which is nice. And Beta and Gamma's hairstyles have pleasantly low nodecounts.

They're done though. Post 'em and keep moving.
Posted by Lorc at 8:32 pm No comments: