I've not managed to get any good colouring done lately, unfortunately. I have some satisfactory linearts though, so I might as well throw them up here. All generic charactery people, no themes today.

The sword guys I did nearly a week ago, but I had trouble finding a "hook" for colouring them. Those strange moon-boots they're wearing turned out to be such eye-grabbingly-large flat areas that I can't just fill them with neutral tones and ignore what they're supposed to be made of. 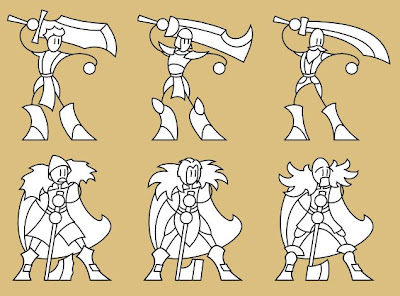 Oh, the poses are a bit weird too. They're supposed to be in a "reaching backwards for a huge sword-swing"pose, but the more i look at them the more they look off. I can't tell if this is because they're actually a bit crap, or just because I was staring at them for too long. Probably a little from column A, a little from column B. In any case, I was running into a wall trying to colour them so I started on something else.

I like those woodsman peeps. The original sketch had something about it I liked, but it turned out to need a lot of massaging once I got it into inkscape. I have a big line of a half dozen tweaks and revisions before these three workables. And I'm still having troubles with hoods.

They feel more detailed than I usually do. The complicated fur ruffs aren't exactly node-light, but even so. It might just be the way that there's so many layers of stuff, subdividing or obscuring all the large flat areas.

The eyebrows of Woodsman gamma are something new. They're a feature I've not done before. I started drawing a hood on him you see, and it looked so characterful with just that first line that I left it that way. I did break the line in two to make it more eyebrowular, but I'm not sure that was a good move. It still looks ok though.

A problem with using eyebrows a lot is that they take up a lot of room. They probably won't work on anyone with proper hair. Still, they're something to bear in mind when a face is looking particularly bland and uninspired.

Looking back at old stuff, I'm less and less happy with surgical failure #3. Definitely needs more visible trauma, but since he's all coloured and "finished" its too much effort to go back and fix him now. The brine spawn monster is shite and I'll probably just try and pretend that it doesn't exist. The harpooners I haven't touched since i posted them here. I should colour them some time.

Looking way back at the crab dudes makes me feel disappointed. I had a lovely texture/pattern thing going on with them, but in all the other stuff I've coloured since there's not been any similar opportunity. The closest I've come is the shiny gold. I'm just not trying hard enough. Maybe I should try silly photoshop brushes - that's a tool I've never really played with.