Layout of a scuffle.

I'm going to talk systems and mechanics now I think. Do excuse me if it seems a little presumptuous.

When two teams of characters go up against each other in a rousing game of red vs blue, it looks a bit like this: 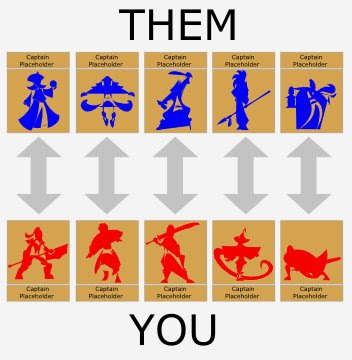 This is a five-a-side, the largest a game can be. You'll often be dealing with (or against) a smaller team. Now let's be depressingly conventional and have characters dealing attacks that do damage to the other guy's HP in a turn-based environment. Characters attack their opposite number as indicated by the grey arrows. The goal is usually to KO the other team while keeping your team as conscious as possible.

A few niggling details: Attacks are exchanged simultaneously-ish. The players make all their decisions (usually only one decision to make - more on this some other time) in secret, then check the "ready" box when they're done. Once both players are ready, the turn happens. Now, having everything actually happen simultaneously would be terribly confusing and mildly impossible, so here's what actually goes on: for each pairing a virtual coin is flipped (invisibly). The winner's attack happens first and then, assuming they survived, the loser's attack occurs. This happens for all the pairings, left to right as is intuitive. Not terribly exciting, but these mechanics have to exist.

So! A basic system for two lineups of people to use each other as punching bags.

One potential complication is what happens with uneven teams or when one character's opponent has been KO'd. Observe: 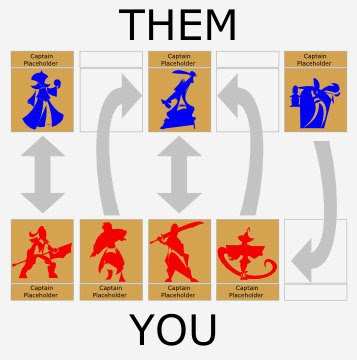 If a character has no opponent, then they direct their attack to the character next in line, moving towards the centre, as demonstrated by the grey lines of attack in this example. Note the blue centre-fielder. The poor bastard's going to be attacked by three different characters each turn. But he still only gets to attack the once, directed towards his opposite number.

Confession: I'm not 100% sure about the attack redirection mechanic. Look to the right of the diagram and you might see why. The right hand red is attacking the centre blue, but toally ignoring the right hand blue who will be pummeling her. This system is simple and easy to grok, but gives rise to the odd silly situation like this. Paired off combatants are neater.

And so! An alternative system would be to slide characters inwards to fill any gaps, creating as many pairings as possible. Characters left on a flank with no opposite redirect their attacks as described above. Potential problem: flanks collapse fast when a character is eliminated because their replacement is probably going to be taking heat from two opponents. But then the current system puts that same pressure on the centre.

I'm thinking that the "slide" method might be better, but it seems the kind of thing that would need actual testing. So this is as far as thought experiemnts and diagrams can take me.

Anyway - that's some basics described. Next time I'll probably describe what sort of attacks characters have and what decisions the players have to make.
Posted by Lorc at 10:46 pm