These are some kind of priest/leader-type guys, I think? They don't have a good name, but I like them well enough. I'm fond of how they have differing torso-coverings with just one or two lines difference. 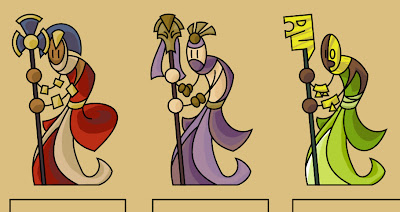 Charlie highlights a problem. Dark skin. Dark colours in general in fact. They don't work terribly well in areas of dense linework. His face is a blot. If it weren't for the gold mask, I'd have written him off completely. Not sure what can be done about this, apart from trying to stick with lighter colours.

Beta looks really pasty up there between the darker-skinned Alpha and Charlie, but I think he's fine when viewed on his lonesome. Especially with the less saturated purple robes.

These are probably your hero-types, so they get wildly different colour schemes. You'll likely only see one of these at a time, and if you do find a second, I want them to be as different in appearance as is practical. Which is why I was originally messing around with swappable heads and so on. Unifying colour schemes are for things I want you to be able to meet lots of - adding variety to a horde.

I wonder whether I've overdone the saturation here. I wanted a bright palette, but I could have used a few more neutral tones, especially on Charlie. I'm pretty happy with the gold though - cheap and easy-looking metallic there (though maybe a green/brown tone would make it even nicer...). I need to build up a library of those kind of texture tricks so that I can bring them out to play when required and maintaining a uniform style.

That's part of why I'm forging ahead rather than trying to make everything just right - forcing myself through a variety (ish) of stuff so that I pick up little tricks that I can use when i do it all "for real". If I ever do, that is. Meantime, this is just fun.

So - nurses. I am also fond of these guys. Lots of variety between them, but with a unified theme and colour scheme.

Trivia time: All colours for these guys were sampled from a burnt five pound note.

Very difficult to come up with three different-looking injecting devices, so Alpha and Charlie just have slightly different syringes. Bit of a cop out, but I felt that there was enough difference on the heads and torsos not to mind too much.

In fact, I'm a little worried that they outclass the mad surgeons too much, what with these meant to be lower in the hierarchy and all. Some of it I can put down to better colouring (including a primitive but passable technique for rubber gloves/boots) and less restrictions in the costuming (aprons don't leave much room for individuality) but still... I think the linework might just be better for these guys.

I'm at a loss for how I could bring the surgeons up to this standard. Maybe if I gave them some kind of outlandish costume element, like scary masks. I could alter the style of the dress from Apron+surgical gown to soemthing a little more vaired, but that sounds a lot like hard work. I might have to just re-draw them all and see what turns up. Or maybe a recolour will redeem them after all. Who can say.

Oh, and yes; Beta is taking his headgear cues from Faust. With his official clipboard and fancy shirt I needed a very obvious cue on the head that he is not a sane and balanced person. I've no idea why brown paper bag over the head isn't more popular amongst medical staff - it seems like the kind of trend that should have really taken off.
Posted by Lorc at 3:27 pm