I've gotten kind of distracted from my vector peeps lately. Perhaps I need a new angle of attack or just a new project to overthink.

Still, not doing veeps doesn't mean I've not been doing anything. I play Kingdom Of Loathing a lot, and one of its iconic images is the sabre-toothed lime. One day I drew a lime in inkscape (to fill up a blank spot in a KoL-related flowchart) and it grew on me. I felt like doing something vaguely interesting with it and I was bored, so I copied and pasted it a few times and started noodling with them. 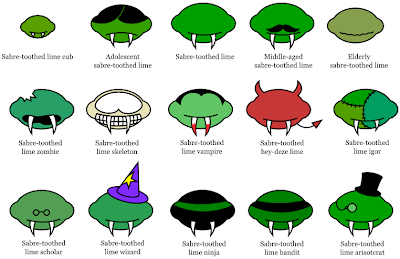 This was the first batch. Kind of mediocre, though I like what I came up with for a lime skeleton though. I reckon that if sabre-toothed limes have skeletons, that's what they look like.

So, to say that they went down down well would be an understatement. So I did some more. There was no shortage of ideas. I mean you've seen this kind of thing before, right? A single image or character modded slightly and wittily captioned? I can't remember exactly where I've seen it done, probably overpriced university posters, but it's a known technique.

Anyway - I embraced that and started churning out limes. Which was great fun. They're easy to do, I'm working off a simple template with no post-vector colouring or texturing attempts. I'd had a fair bit of practice with inkscape recently (as demonstrated on this blog) and this was all the same techniques, so it went easier. Slightly different style and conventions so it was a bit of a change. In fact, because I wasn't making a deliberate effort to keep nodes to a minimum, it was actually easier than some of the veep stuff. The lime skeleton's teeth or the igor lime's stitches are examples of the kind of indulgence I allowed myself. Squidgy hats were another, though not seen here.

I ended up doing seventy-seven in all, plus some bonus. I'll pop them up here with commentary in lieu of doing anything new I think. It's fun to talk through this stuff.
Posted by Lorc at 3:28 pm