Monsters are tricky. I can't really do much stickman stuff with them, because the eye isn't so good at knowing what it's looking at. Large and burly is also incompatible with stickman. So, large and burly monsters are doubly bothersome. On the plus side, if stickmen are the standard, then limbs with actual shape and volume look especially large and burly.

So, two large burly monsters. A giant insect guy, and an elder brine mutant. See, I told you I was planning more brine mutants. it just took a few months before I came up with a fish-guy sketch that wasn't awful. 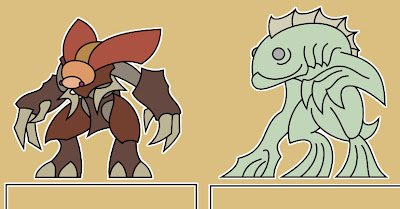 Insect guy's anatomy is more man-in-suit than beetle, although he does have that carapace. I do tend to repeat the same styles and designs with anything that has large armour segments. Still, I'm not unhappy with him. Is he the start of a batch of big mutant arthropods? Possibly.

His head was tricky. On the sketch that area was just a big scribble. Once I settled on a beetlish tiny head, I had the problem of how to make it stand out against the chest. Colour to the rescue. The secondary arms gave me pause too - they're small enough that I didn't want to devote too many lines to them, but I wanted them to look like more than armour ornamentation. Colour helps here too. I imagine the ltitle arms are used for feeding himself, grooming and other delicate work - the big strong arms probably aren't so dexterous.

Fish guy's feet are a bit dodgy. I cut myself some slack since they're meant to be froggy/fishy - webbed and floppy. The hand on the ground just about works, but I'm trying not to look too hard at it.

Variants on these two guys' skeletons seem unlikely. First of all, being large burly monsters there's not really much of an underlying skeleton. No clothes or accessories means not much to vary. I'd have to end up redrawing quite a bit of them, in which case I may as well just do a whole new one.

Perhaps for cases like these and the dinosaurs, I should use colour variations only. It could work but I'm not terribly enthusiastic. I was thinking they could be unique "boss" monsters, but I can't do that for every monster that's tricky to tweak. But palette swaps are so cheap...
Posted by Lorc at 12:22 pm