Who watches the limes?

These were done just for fun - not as part of the compiled limes poster. Well, that's not entirely true. While I was scraping the bottom of the barrel for lime ideas I did a quick+easy Dr Manhattan lime and a Rorschach-masked lime (radioactive and sociopathic sabre-toothed limes, respectively). But then I thought better of it - I wanted the limes poster to be somewhere between KoL-based and generic. Other-media references that weren't already KoL mainstays (like the protagonist) didn't deserve a look-in. 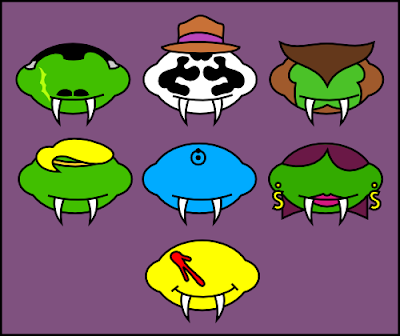 And then I got inspired so I sidelined those two watchlimes and got on with making more proper limes.

But yeah, I came back to them. Gave Rorschach a hat and decided to try and do the whole lot. It seemed a fun kind of challenge. After all, Rorschach and Manhattan were the low-hanging fruit.

I like The ozymandius lime. He's recognisably him, despite not actually having that particular hair style in the book. It works though I think.

Sally Jupiter was the hardest, sicne she doesn't have a gimmick. Her long hair feels a little like a cheat, but there you go.

Comedian was the last one I did, and my favourite. I like the scar, though I should probably have moved it closer to the tooth so it was more obviously intruding on the mouth for his signature smile.

Silliness: I arranged them in the order that they first appear in the book, Ozy excepted for obvious reasons. Maybe that means I should have put the smiley-lime at the top? Meh.
Posted by Lorc at 9:00 am