Today I seem to be getting stuff done. Not much important but... well. You take what you can get. It's nice to get back into the groove of doing these guys after a lime-filled drought.

Swordguys in robes. Initially based around your typical elegant samurai in dressing gown, but mutating as I worked on them. I'm going for a hodgepodge aesthetic overall, so that's a good thing.

I was pleasantly surprised how different the three variations ended up. The original seemed so specific that I assumed the differences would be trivial. On the other hand, once I'd finished I started worrying about remixability. It looked like there was only swords and heads to swap about. But a quick bit of experimentation revealed that the torsos and lower body could be convincingly swapped about too. Which was nice.

The part I'm least happy with is the weapons. The pose and style really demands an elegant two-handed sword. You can tell that #3's was a bit of a stretch. I think I meant it so be some kind of reverse-bladed scythy thing? 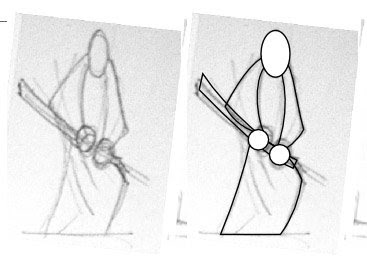 i didn't actually set out to do these guys just now, but I've had their base sketch lying around on my WiP document for some time and I got carried away fiddling with it. It was a particularly sparse scribble (as you can see), but it had something about it that made me want to work off it.

That's how these guys normally start off you see. A pencil scratching of lines that appeal (though usually a little more complete than in this case) then drawing over the scan in Inkscape.

But yeah. I was impressed by how easily the finished three came from that empty scrawl once i got going. I have other barely-sketches too, lying around waiting for a spark of inspiration to ignite them. Sometimes I'll develop them to a lineart like this, sometimes I'll just re-sketch them to try and get back into the groove I had when I made them originally. And sometimes they just languish. There's one of a guy with a large hula-hoop thing that I want to develop, but I'm lacking a good direction to take three different hula-hoop weapons. Hollow buzzsaw-type, maybe something with spokes? Spikey might work. I don't know. I've done plenty of this already today, I have real things that I ought to be doing.
Posted by Lorc at 4:14 pm