I didn't want a brown werewolf. So apparently they're green now. That works for me. The grey-blue has the actual colours I worked with, but I liked the hue shift to green so much that he's become the definitive one. I love hue-shifting. So useful. It brings out colours and combinations I never would have thought of using. And they usually look a good deal more natural than what I drag out of the palette on my own. 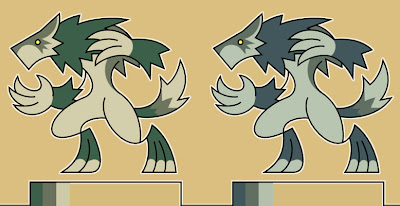 The green works well though. I imagine the werewolf being part of the forest witch theme. His name is Gordon for some reason. Perhaps he's a not-virtuous-enough knight "blessed" by the moon to protect the wilds.


When I was playing with the colours I tried colouring the hair as fire. It didn't work. But it was fantastic as an autumn scheme. I'm going to have to try that in the future, maybe as a subtheme. I bet it would look great on the green men. A summer lineup and an autumn lineup would be aces. Maybe a spring one too, or would that be pushing it?

Yesterday I gave up in frustration over the left hand. I couldn't get the linework right. This morning I resolved to fix it no matter what, and opened it up to find it perfectly ok. Maybe I was tired and over-thinking it, or maybe brownies fixed it in the night. Either-or. Ok admittedly the hands are pretty crappy, but better is the enemy of done and I've found it easier for me to improve if I just move on and do better next time.


I tried too long to give him a mouth, but eventually I resigned myself to the fact that he looks pretty damn cool without one. The lack of a cliché snarl also makes him seem more "noble savage" than "frenzied horror", which works for the theme. My remaining concern is the feet. It would make sense that you can't see all his toes on one foot if he's stalking sideways, but I'm not sure that reads right on the drawing.

I am particularly happy with the colouring. I dithered over particulars for ages, but I think I've ended up giving him character without too much unnecessary detail.
Posted by Lorc at 3:15 pm