A crystal guy. Possibly some kind of golem or elemental. I wasn't sure how well I could create a crystalline texture in this detail-sparse style. I had to use hover-limbs to get it in the end, but I think it worked. I've a major soft spot for crystal-people thanks to the Shard from Vor. This is blockier (necessarily) and more like a "traditional" crystal golem than the sophisticated look of the Shard, but I did borrow shamelessly steal the head design. 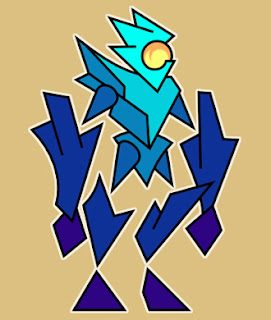 What didn't work is the pose. So boring. So very, very boring. I was hoping I could get "forceful dignity" but it's really just... boring. The floating limbs are easy to repose at least if I decide he merits importance or expanding into a theme.

And the hands. Couldn't get any kind of fingers/claws going so I went with the abstracted hands. Irregular diamonds rather than circles because they worked better with the crystal theme. Surprised I've gotten away with it. I tried to put more detail on the feet too before deciding that they looked better as simply blank polys. The colouring might help here too, since the dark extremities suggest there may be invisible detail.

Ok, on a positive note I like how the spherical face/eye is embedded into the head with a minimum of fuss. And the faceted chest/shoulder - that's the only part that really looks crystaline, but its existence makes you interpret the other angular parts in a similar way. Sells the whole thing.

Colouring was a bitch. I planned to do something shiny or glittery, with detail shines, but it wasn't coming out right. The graduated colouring was a good plan. I'm not sure this is the best implementation of it, but it worked well enough for now. If I took another whack at it I might make the mid-tones more saturated and bring the lighter two shades closer to white. 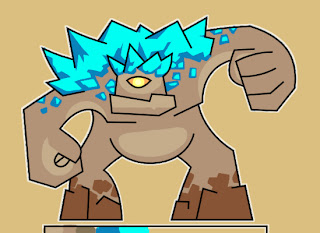 I don't anticipate him being expanded into a theme. He might be a relation to the earthen Cyclops. Especially if I did one or two Cyclops with specifically crystal parts rather than just rocks. Crystals also mean wanky ancient science-magic so it could be a lost-city thing, or just a random weird thing. Oozing with possibilities. Veritably suppurating.

Wow, where'd that negativity come from? To counteract it I'll actually mock up a transition Cyclops. That last one I did was pretty spiky after all.

There. Not perfect but it shows that it's not a terrible idea. Also managed to almost re-layer the drawing in the process. So that's nice.

Tempted to re-hue to body to blue or green, but I wanted the crystals to contrast rather than blend in.
Posted by Lorc at 6:46 am