Another puppet/doll. I doodled a few of them and this was the other promising-looking one. It turned out as a bulkier-looking thing. No variants obviously - didn't seem to be much potential for them, though I may try different arm-blades and masks at some point. Maybe play with the joints or give it seams in the wood? That's not a bad idea actually. But maybe later.

The spinal-looking connection between hips and torso reminds me a lot of the safeguard from Blame!, which isn't a bad thing since they were one of my major inspirations for the puppet look. For the record, the others are Naruto ninja puppets, Devil May Cry's early enemies and the character Puppet from the Amiga game Body Blows Galactic. That guy's been stuck in my head for years.

The worn-away paint on the legs and feet was very effective here. Makes it obvious that it's a wooden puppet without too much detail, and makes it seem heavier on its feet than the snickerdolls.

I think I want to make one or two more kinds of puppet. I have a design for one that's stalled at the linework stage because of a dodgy neck, and I feel like I don't yet have a generic or baseline puppet. The snickerdolls seem a touch too characterful to fill that role at the moment. I want something in ruffle-y clothing, a skirt perhaps and floofy sleeves.

Getting away from dolls but not abandoning wood. Plant elementals. Intended for the witches, though flower-guy would also fit in with the jungle island. I'm glad I've been able to do more with this technique for depicting plant masses. As I've said before, monsters tend to lack superficial details that I can swap about to make variants. Too much of their shape comes from basic structural elements. 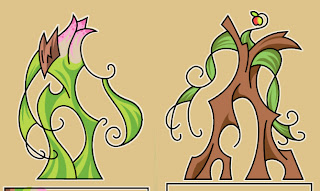 Anyway. I have issues with both of them. Starting with the ore tree-like, his pose is weird. I wanted an awkward and not-right pose, but this is a bit too far. I can see an easy alteration that might fix it but I'm leaving it for now.

I drew tree-guy without a head, but he seemed to need something there so I added the apple. I think this was a particularly good idea, since it gives him a sense of identity distinct from a generic tree-man. Perhaps Applechild as a name? Ambiguous whether the apple is the brain or just the prize. I imagine that his kind are something the witches summon from apple pips.

Flower guy's right hip is my favourite feature. Also the uneven "eyes" on the mask. I worried a lot that the flower drew too much attention from his mask/head. I've been staring at the whole, and now I'm wondering if it would look cooler if I removed the head entirely. The pose would be reinterpreted with the flower as the head and the result looks like it will be quirky.

However I did all this thinking after I'd coloured it, so I wasn't going to muck about back at the linework stage. So I'll note the possibility here to come back to one day.
Posted by Lorc at 6:14 pm