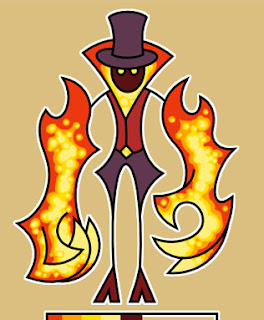 Another fire-themed guy. He's probably an elemental of some kind. Initially he didn't have a top hat or even a head, just a plume of fire. He was going to be called something flue or a flue something.

This works much better. Fire elementals and top hats seem to have unexpected but excellent synergy, like werewolves and the colour green.I am fighting the urge to go back and pop a top-hat on my last fire elemental too.

I'm trying to dial back my fire effects a touch. While I like the look, it wildly outclasses non-fire areas in detail. I wasn't terribly successful at it here, but my goal is to simplify it while still keeping as much of the nice embery look as possible.

I have no strong creative direction for the "infernal" theme. Imps and fire elementals so far. A few sketches of ogres. I think I'm leaning towards "devilish" over "firey", since that means more variety - cute little imps and dapper suits - without excluding fire. For now I'm just making stuff and seeing what sticks. As always I can come back and fix things later. 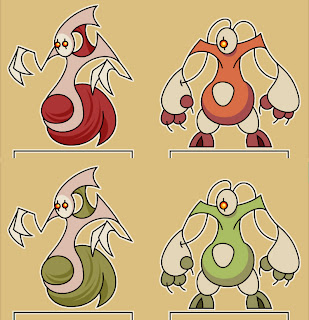 These monstrosities were initially meant to be infernal too, but after working them they seem more "ancient biotech evil", especially if I go with the green versions. They may yet have a home in the infernals - a technological subtheme might be cool - but again there's no need to commit yet.

Obvious Phyrexian influence, but I'm not ashamed. I don't consider it close enough to be a ripoff. The thing on the left was originally meant to be an insect queen, but ended up like those funky things from Blame!.

I like the eyes. The circular lens with the weird track-line gives them a distinctive look I'm happy with. And it can easily be applied to a variety of critters. Zombies with prosthetic heads for example. Another good point are the bruiser's fingers. They were a happy accident. A weird combination of sausage-fingers and needle-fingers.
Posted by Lorc at 2:39 pm