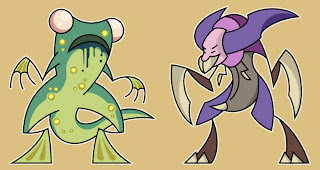 Both of these are old line work tarted up a little. I've been going through old WiP sketch pages and trying to rescue abandoned bits with potential. It's nifty that there's a decent stock to be plundered there. It makes me happy that I'm actually producing this volume of stuff. There's some saying about how it's impossible to do the same thing three-hundred times and not get better at it. It's cool to go back to failures now I'm better less crap.

The amphibious thing is a bile toad. I know it's not a toad, but I like the name. I don't think it's diseased - the "bile" is natural toxin that's expelled through the skin and drool. I am very pleased with the milky eyes. I wonder whether I could do a worthy variant with exactly the same linework, but losing the warts.

The soldier bug was briefly a bug soldier. But bug soldier sounds like a description, while a soldier bug is a name. I used the detail here to add depth and definition to shapes, sticking my middle finger up at a consistent light source. Also to make the pointy bits look sharp. Colours suffered some twiddling when I realised that the pale face and colourful horns/carapace made him look like a clown. I couldn't unsee it. I can live with the current incarnation.
Posted by Lorc at 1:21 pm