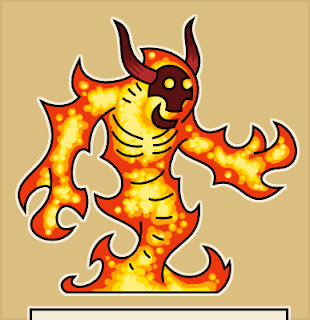 I named this fellow Pyrovile. I like this name. I started him and the imps below yonks ago, and just now got round to finishing them.

I dithered a lot over how to do his "skeleton". I think this is as close as I'm going to get to what I want without breaking the node-budget. He originally had arm bones, but this made the hands look more like random flames (odd), so I took them out.

Things I am pleased with:
The twisted flow of fire at his base.
The little bulge of fire around his skull
The way his left eye breaks the edge of the skull-shape.
The name, pyrovile. Pyrovile.

The colouring I have mixed feelings about. It's quite a bit messier than I want, but it's not terrible. I was going for the same effect as I used on the wicker man, but I think it worked a lot better there. I might need to get a new fire technique for the infernals. I don't think I want them as clean as the firefox, but this lots-of-dots method seems too embery. There's probably a nice middle ground, or maybe I'll just get better at executing this style. 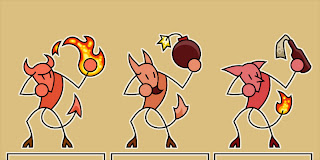 A little less fierce-looking are these imps. Little arsonists trying to look innocent. They're based on a goblin/imp pattern I used with my very first primitive vector stick figures. The main changes are the cloven hoofs and the ears.

For the fire, see what I said about Pyrovile.

The ears were originally horns. Eventually decided to go for ears because I could do more varieties. And it's easier to make ears that evoke horns (as seen on the first two) than vice versa.

I agonised over whether the extra lines to make those cloven hooves were worth it. Agonised! I'm glad I did it though - it's a new kind of detail and it adds a lot.Besides, they're so simple they needed a little extra something.

I'm still not sure about the variety in their incendiary methods. Fireball is a little different conceptually to molotov or bomb in my mind. If I ever put them to work, I may need to revise them so that they're all obviously the same class. For now they're just shy of my "bothered to fix" threshold.
Posted by Lorc at 1:51 pm