Flashback to May 2009. That vine golem's cute, but the flowers have far too much linework, the shapes don't flow quite right and the colouring is muddy. It needs a revamp. 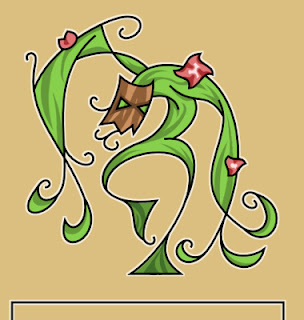 That's more like it. I think the biggest problem with the old version was the line density. I did a lot of small things to improve the ratio of lines to open space. The flowers were dialed way back, trusting in the colouring to give them definition. The mask is redone and made to contribute to the 3d flow of the pose.

I decided some of the vine twirlies were unnecessary and removed them. A lot of the body lines were tweaked and separated slightly to make sure there was more body than outline.

I made up for all the lost texture with the colouring, now that I'm "allowed" to use detail shading. Much more vivid and tropical now too. It has most of what I liked about the original, but updated to my current standards.

I don't think I'll be giving this treatment to all of my old ones, but this particular one was drawn to my attention and it was nagging at me.
Posted by Lorc at 10:12 pm