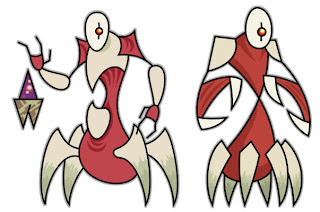 Side-by-side, it's striking how much more detailed the left-hand one looks. It's only slightly more linework and slightly more shading detail, but the aggregate effect is significant. I think changing the right-hand one's waist would eliminate most of it, but I like those waists.

I don't want to crappify the left-hand guy, because he looks cool. But I also don't want to sacrifice the style by trying to bring everyone to that standard. I guess I could call him a boss.

They have names. On the right is a caretaker. On the left is an inscrutable.

I was concerned that the architects would be too samey since they have strong similarities and not much in the way of weaponry. I didn't want them all with weird guns like the purifier. Here especially, both have scuttly-bodies. Even if the caretaker's odd pincers, I felt the inscrutable might be too close. Floaty artifact was an excellent solution that I plan to use more.

Trivia: Despite their more complex appearance, the inscrutable's legs each have the same number of lines as the caretaker's.

Caretaker looks a little gormless. I think he'd be a grunt-type.
Posted by Lorc at 2:45 pm