I mentioned that I'd gotten into doing icons, yes? Here are an arbitrary sample of the (over 170 now) ones I've done. I've got the idea in my head that these are the skill icons for characters' attacks, to add some visual interest and flavour past the name. 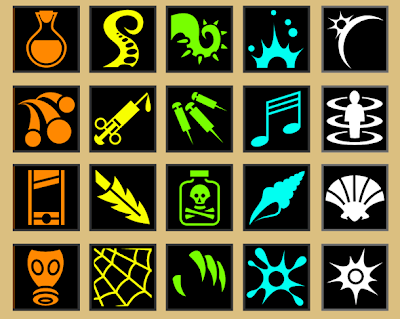 Since they'd be pretty small, I went for clean, distinctive shapes and maximum contrast. They were all draws as white on black background, like the rightmost column here. The coloured ones are experiments. White on black is striking, but boring. Colour adds another axis of interest. I could use it to distinguish two skills with the same icon - an orange potion vs the blue potion, for example. Though for now, icons are fun and easy enough to make that I'm in favour of each skill having its own unique icon.

More likely to my mind is colour-coding them so that, say, default skills are green, conditionals are yellow and specials are orange. Other colours could be used for things like passive traits or I don't know what. Another option would be, rather than a uniform colour key, it varies for flavour. So player characters are always orange yellow green, but maybe the fish cult enemies go blue, cyan, white. Not sure whether there's enough design space there to be worth doing, but I like the idea of local colour schemes.

Speaking of colour, I had grander plans initially. I was going to vary not just the colour of the icon, but the colour of the background too. So I could have yellow on red, white on blue or whatever. However experimentation showed that the vast majority of colour combinations just didn't have enough contrast to look good at small sizes. Even something like red on black proved too difficult to distinguish, hence why it's only bright colours up there. Tinting the background remains an option I suppose; that is, near-black colour shades.

I let myself use a lot more nodes and lines than I do on the veeps themselves. It would have excluded more interesting ideas than it spurred, I think. Besides, the small size and two-tone style provides plenty of restrictions as it is. 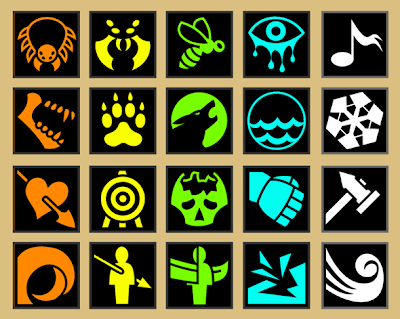 I tried to stick to some conventions. The more literal attack icons, whether they're swooshes or weapon icons, travel from the top left to the bottom right. More symbolic icons can stay central. Compare the pierced heart to the target next to it. Both could be icons for the same kind of attack, but the former is representing the attack, while the latter is describing it visually.

I built up a small vocabulary of shapes doing these. Hearts and shields are good - easily recognisable, even if you mangle them a little bit and a cracked or pierced heart or shield has obvious meaning even without a name to go along with it. The little person silhouette is good too. It can make a fine crash test dummy, or I can surround it with auras, halos or what have you.

By and large, these icons were made with no specific purpose in mind beyond looking cool. I decided "I want to do a swooshy thing" or "the ground cracking" or "a splash". Sometimes I had more specific motivations; "something suitable for a beast" gave me the first three in the second row of that picture there. Looking at the brine mutants I made a few tentacles, shells and so on. The big burly insect bruiser was the impetus for some bug-based icons. But I'm using them as springboards rather than wedding myself to any specific plans. I'm making these icons because they're fun to make. Any eventual purpose is unlikely and secondary.
Posted by Lorc at 11:05 am