I suppose these are properly props rather than creatures, but I see them being used in much the same way and it's good to expand.

I was wary of them being cheap and sloppy-looking compared to the characters. I took several passes throwing away dodgy-looking elements and adding more details like the dead animals. At one point I had a hanging skull and ribcage, but it just didn't look right. I have a method for doing ok skeletons in the stick figure style, but in the context of the wards it wasn't obvious what you were meant to be seeing. There's very little room for me to be stylised on these so I focused on making the masks bright and chunky, and keeping the skulls low-node.

In case it's not obvious, these are meant to be some kind of territory marker. I guess they'd have a variety of useful effects like inspiring allies or terrifying enemies. They may or may not be magical. I don't see myself doing a lot of prop-type enemies. These felt right though. Maybe for a reason as silly as having a face. 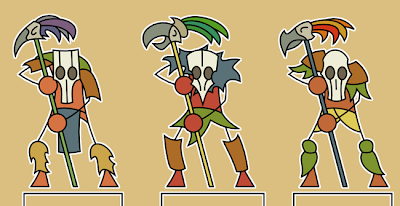 I also recoloured the witch doctors. They were too dull; I wanted them brighter and showier. Still not hugely happy with them to be honest, but not sure what needs to be done. Maybe they're still too unsaturated after all.

Embarassingly, I've run out of decent ideas for jungle peeps. I've got spear guys, sword+shielders, witch doctors, fetish totems and a vine golem. Is that enough? I could lump the dinosaurs in with them I suppose. Drummers maybe? If I can come up with an interesting pose. Carnivorous plants? Some kind of triffid? Maybe it's time to just go back to doodling randomly until I happen upon a new theme.

Hmm, maybe if I could come up with a nice style of armour, based on the mask shapes, I could do a jungle juggernaut character. Worth scribbling I think.
Posted by Lorc at 11:18 am