More for the university. Librarians. Or possibly teachers (or even students!) with a textbook. They're very tall and with little dynamism. I wondered whether I should give them cats to fill out the frame - both as wizardly familiars and because everyone knows that libraries like to have a pet cat. I may yet. 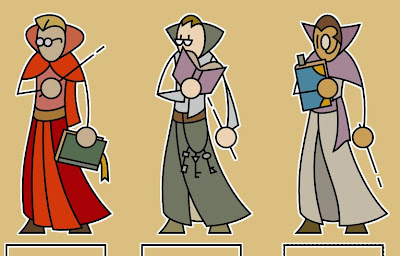 I apologise for how boring the colouring job is here. I don't dislike these bookmen, but they don't particularly inspire me either. Filler again I suppose.

I'm glad that I was able to get three different book-holding poses. Especially #2's. Since it's really the book that is the focus, I used the simplistic wand technique I described before. Which reminds me - turns out I was wrong about how exciting eyebrows were. One of the woodsmen had them, albeit single lines with no volume.

Maybe if I use the house colour schemes method I'll be able to approach these a bit more vigorously. As is they're really rather mundane. The puppeteers were far more fun. Flamboyant costumes, cute puppet poses and bright colours.

Somehow the colours left #3 looking like Revolver Ocelot from MGS3. The effect is not entirely unpleasant, if not exactly what I had in mind when I did the linework.

These seem too fun to be dismissed as generics, but I don't yet have a proper home for them. i suppose if I had enough ideas i could do a carnival or circus set. I have a juggler I could wheel out, and a jester/fool type would be easy. Lion tamer too maybe? But evil clowns is not a trope that has ever gained any traction with me. Perhaps I'll stay away from anything circus-like and have them - along with the juggler - be street performers as part of a "city" set along with the thugs and thieves. That might work. I'd still want to do a fool though - he could be part of the chivalry/joust set to provide a bit of contrast with all those knights.
Posted by Lorc at 1:22 pm