This is my idea of a productive Saturday morning. Glam imps! I've had it in the back of my mind for a while that imps may be imbecilic pyrotechnicians, but they're also badass musicians. These are closer to human-proportion than their kin, but it was necessary for the pose. Maybe it's the drugs and rock&roll lifestyle that turns them lanky. I'm happy enough with these that it makes me want to make the rock/metal aesthetic the imps' thing.

I'm happy with the basic guitar template. I think it has just enough lines to evoke, without getting too caught up in the details. The tuning screws in particular. While I was colouring them, they didn't really take off until I decided that #2's long flowing hair needed to be bright pink, and realised that the guitars needed to be brightly patterned. After that it all fell into place. 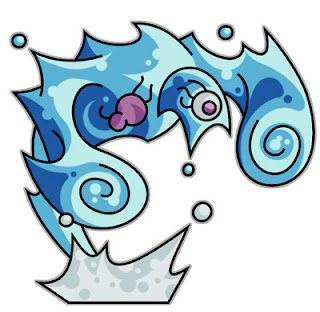 #3's "hair" is weird. But not in a bad way. It's either shiny nylonish fur or stage-FX fire. Either way it looks cool enough. #1's squinty eyes are cute, and I like to imagine his outfit is a little metallic.

It's been longer than I realised since I last did a proper trio with interchangeable parts. Hair/wings, eyes, gloves, torso, guitar body, guitar head, tail tip. Now that's modular!

Also I tweaked the hydrocore to be lighter. Looks more vivid now I think.
Posted by Lorc at 5:00 pm