Down on the bottom right, you'll see that I fixed up the artisan. Fixed his awkward lean, gave him a more distinctive head and had a better go at colouring too. Lingering suspicions that the feet aren't right, but minor issue overall.
And having done that I felt like doing a lineup of all my architects to see how they work together. I like. 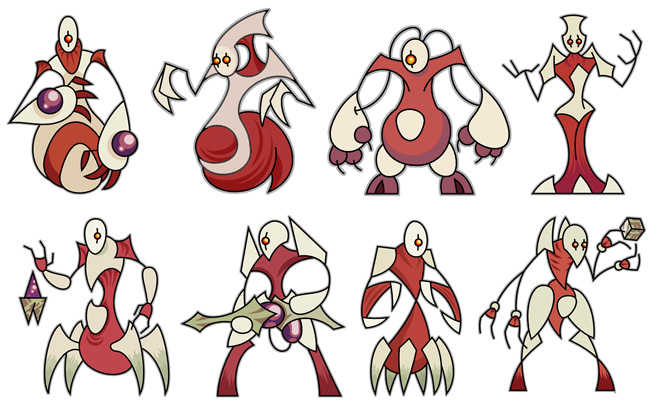 Now the two proto-architects don't quite fit (I played with the colour balance for this pic)but I don't think it would take more than trivial tweaks to fix that. If I was going to do just one more, I'd try and make one that bridges the gap between the potbelly pounder and one of the lither specimens.

When doing them I deliberately used slightly different shades on them all to make them seem more individual, but I'm not sure about that any more. Totally different would be cool, as would exactly the same. Slightly different sits square in the realm of not-right. I also wonder if I should have gone with the green, but I just can't imagine them as anything other than red and bone now.

This feels like a completed thing. I am happy with it. I have ideas for more stuff, and if I sketch something awesome I may make more, but these eight will be fine even if I never do.
Posted by Lorc at 11:11 pm