I was feeling silly one day and so I made some more sabre-toothed limes. 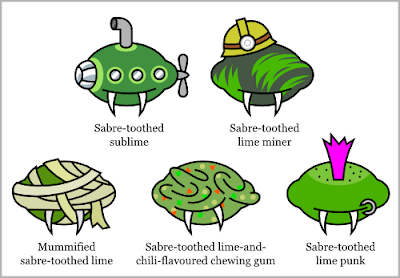 The sublime was very, very silly. The awful pun amused me though.

The miner was one that I really should have come up with as a part of the original batch. I thought it would be a simple job, just plopping a helmet on a regular lime. It didn't look right though. Hence the coal-blacking. The smears were borrowed from one of my black & white icons. That's a use for the icons I hadn't considered - a library of useful shapes.

The mummy is awful. It looks like it's been attacked with a roll of toilet paper. You can tell I had no big plan for a bandage pattern going in.

The chewing gum is also silly. Won't make much sense unless you know that lime-and-chili-flavoured chewing gum is an item in KoL. It was one of the very few lime-related things in the game that didn't get an entry in the old batch, so it was a shoe-in for generation 2.

The punk is just random. Lime with a mohawk seemed a good start for something. I like the shaved head look though. Lip piercing is unsatisfying. The outlining is overwhelming I think. Also the pink hair would probably look better as a dark green or green/blue.

Lime-in-a-box is not randomness; it's a reference to randomness. KoL has a lemon-in-a-box amongst its enemies. Conveniently I'd already drawn an LitB for another project so I just replaced the lemon with a lime. Job done. Won't fit neatly into a grid should i complie these though.

The batlime I mentioned previously as a temptation. Decided it was worth doing after all.

BRICKO lime was fun. One of the more worthwhile ideas. A reference to a recently added item that lets you summon BRICKO bricks. Tried to ape the art style. The fangs were an indulgence, but they're based on an actual Lego brick so that's fine.

El Vibrato lime is a new favourite. The El Vibrato monsters have a really cool look within the constraints of KoL's style, but I reckon they'd also work great outside of it. Implies a lot of detail. The blue knight-rider lights are taken from an item description. I reckon this lime sits in the sweet spot between faithfulness and looking good on its own.

Gimacite is another I'm happy with. hard, black and shiny. Based it on the sabre-toothed limestone initially, then started meddling.

The lantern's glow isn't quite right, but I didn't want to use gradients.

Limeling's based on the slimeling. But limes don't have eyes, so it gets little limes on stalks instead. I thought this would be a stretch, but it's an obvious riff to look at it and the pun justifies a lot.

I don't have much interesting to say about these four. The class limes are significant I usppose. Not sure if I'll do the other four - the muscle classes have by far the most identifiable headware.

Trivia: I looked at a real seal skull for reference for the seal-clubber's hat, but it didn't look sealish enough. I compromised between it and the in-game icon then added a bone muzzle to seal it up. 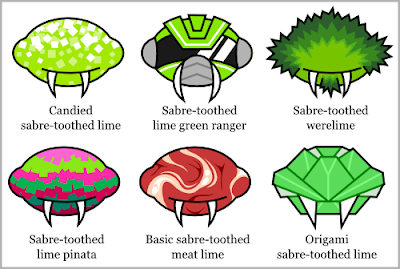 The candied lime was almost a crystalised lime - that was I could put a lime in a sweet wrapper and call it a candied lime. The name suits this better though. I could always do a sherbert lime. Pleased with the texture, though I keep wanting to fiddle with it more.

Entirely too much fun was had making the lime green ranger. Never actually a Power Rangers fan, but aping the style was a riot. I wanted to do more. I think that tactical use of white lines is what I'm most pleased with here, though the fanged mouthpiece is also neat.

Werelime was an idea I had during the first batch, but couldn't pull off. Even now that I'm more experienced with inkscape, it was a bother getting it looking right. To start with it looked more like a porculime (mental note: do a porculime) or a puffer-lime. or maybe just a mudkip.

Pinata was fiddly and hasn't turned out perfect, but it's identifiable.

Meat lime was difficult. The fat marbling alone wasn't working, but I didn't want to drown it in detail. The dark creases sell it think, though the highlights on the fat also contribute.

All in all the second generation of limes has a lot more detail than the first. Which is nice. I'm stretching. Right now I feel I'm all out of inspiration, but that's what I thought at the end of the first batch and here I am twenty-two limes later.

I had oodles of fun making these.
Posted by Lorc at 6:12 pm