Here's the rest of the limes. Seventy seven. Well, seventy-six, counting the n'est pas une lime. Even less if you count the skewered/sliced limes proportionally. And past that awkward questions arise about whether if the snow lime isn't really a lime, why is the plexiglass one? So let's just call it seventy-seven and leave it at that.

Limebat - KoL features a variety of very silly bats. Limebat is conspicuous by its absence. Until now!

Mariachi lime - Should I have given him a moustache? An enormous moustache seems appropriate, but the sombrero seems enough. Not all of them can be OTT. 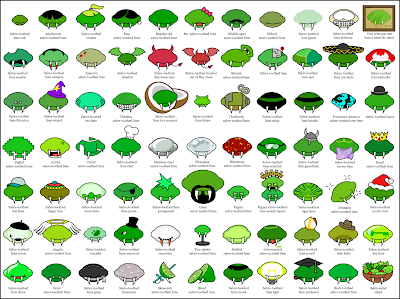 Ninja/bandit - The bandit is probably the crappest of the limes. See, the "joke" is that he's just the ninja lime with the mask inverted. Which probably amuses nobody but me, since everyone just said he looked like a ninja turtle. He became more and more acceptable to me as I added more limes to distract from him.

Anime lime - You try anime-ising something with no eyes. I think it came out ok considering, but I feel a little guilty including it because it's not terribly KoLish (already had a protagonist lime for that) and it looks incredibly lame when people try to parody anime-style and get it wrong. I keep looking back to this guy with scepticism, but I guess that mouth's passable.

Cubist lime - I'm pretty sure that anyone who actually groks cubism will think the same of my cubist lime as i think of most attempts to parody an anime/manga style.

Brimstone lime - Necessary to complete the ascension rewards, but an arse and a half to do. Still not happy with it. I mean, the brimstone effect looks good to me. It seems a nice compromise between the KoL graphics for brimstone (glittery rock) and something that looks ok next to the plexi, but the shape of the lime is lost and the whole thing just seems flat. Not going back to this bastard any time soon though.

Harem lime - This was one of the OTT limes. Lots of detail, but it seemed kind of necessary to make her (or him!) properly haremish.

Giant lime - KoL giants are distinguished by having beards. Applying this to a lime amuses me. I guess that actually making him huge as well works against the joke, but it would be a bit weird otherwise.

Pygmy limes and assault squad - These are pretty faithful lime version of the KoL monsters. I probably shouldn't have double-dipped the pygmy thing for two limes, but a pygmy lime next to the giant lime seems obvious. And doing things like "pygmy lime", "pygmy lime assault squad" amuses me. I did it with the Hey Deze lime, Limebat and Hey Deze limebat further up too. I came this close to doing a batlime, but couldn't work out where in the order it should come for optimum hilarity.

Tiger lime - It made sense in my head, ok?

Lime mime - I like this guy. He's another "how do I do this with no eyes?" deal. The teardrop makes it. Eye makeup that doesn't require eyes. Without it he just looks like nothing in particular.

Lobotomised lime - This one nearly felt cheap to me. But the lime-juice drool came out nicely I think, and the pith-scar too (used same technique to improve igor's scars and when i did the comedian watchlime). So all in all I rather like him after all.

Key lime - Is that what key lime is? Some kind of jelly stuff made of lime that goes in pies? I'm not sure. Anyway - this is an interpretation of the KoL key lime joke.

Skewered/sliced lime - The skewered lime is an actual KoL item and so needed to be represented. In the process I made a lime cross-section. I liked the look of the sliced lime and wanted to include it just for that, but couldn't come up with an amusing name/caption. So in the end I just stuck it next to the skewered lime to sort of imply that that was what was left of the lime that segment was taken from.

Professor lime - Last one I added to the poster. Not terribly happy with it. Mortar boards tougher than expected.