So, you have a spread of maybe 3-5 characters. There are three kinds of attack - Special, conditional and default- and each character has one attack of each kind. Exactly what those attacks are and what they do depends on the character and how they've been customised.

I'm fairly happy with this idea - it seems to have a lot of good design space.. Lots of things that can be done with it, lots of room for players to be clever and not too much option bloat.

I should explain what the attack types mean. They're listed in order of priority:

The conditional attacks can be quirky. They're defined not just by what effect they have, but under what conditions they are used.

Default attacks are what a character will use if you didn't tell them to use a special and the conditions for their conditional attack are not met. These are usually simple and uncomplicated/boring.

Conditionals are the clever bit here. Although you only make decisions regarding specials, you'll be trying to manipulate the game to maximise use of your conditionals and hinder your opponent's. They also give characters a bit of variety in how they act, even when you're not directly controlling them.

Examples will probably help. Let's come up with a theoretical set of attacks for a hermit crab-type guy. 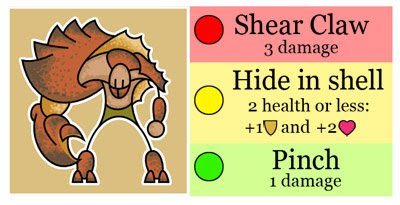 So, generally he makes a weak attack, but if he's been badly wounded, he'll hide and try to recover. This is potentially useful, but since it prevents him from attacking it's a double edged sword. Fortunately you can override that with his powerful special attack if you need to.

So if you're using this hermit crab guy effectively, your tactics will probably revolve around keeping him healthy via healing effects or using his special to keep up the pressure late game.

Notice how the conditional isn't just another attack, it defines his behaviour absent player intervention. This is what I think is interesting about it. It gives characters a kind of personality. And because you can vary both the trigger and the effect, there's a potentially huge amount of variety possible here. Conditionals can be advantages, drawbacks, or neither.

They also make "AI" for enemy teams of characters almost unnecessary. I reckon you could just have the computer activate a random character's special and because of conditionals, it'd still result in a fairly varied and natural-seeming play. Clever design of conditionals for world enemies can also give them variety and personality without needing to tell the computer how to handle them - it's all done by the same basic ruleset.

Random conditional ideas:
* Alpha strike. Powerful attack triggers only on the first round of combat.
* Laziness. Character does nothing - triggers only on first round of combat.
* Second wind. Character heals themselves if they only have 1 hit point left - important to try and play around this if you see an enemy with it.
* Combo strike. Triggers if you used a default attack last turn. This makes for a in character that goes "Attack A, attack B, attack A, attack B".
* Charged strike. Triggers if you used a special last turn. The special is some kind of charging-up move and the conditional next turn is the real reason to use it.
* Last man standing. A more powerful attack that is used when this is the your only character left. Another one to play around.
* Vs X. Triggers when you're opposite an eney character of type X, dragon, giant, wizard, swordsman, whatever.
* Status effect. Triggers whenever your opponent lacks the status effect this inflicts. This means the character will try to put an effect on the enemy, and then refresh it when it expires.