These fine swashbucklery-looking ladies are actually a couple of experiments all rolled up into one.

First of all they were another early colour experiment with block fills. And, as I'm sure you noticed right away, they're all "reskins" of the same skeleton. This was another experiment. 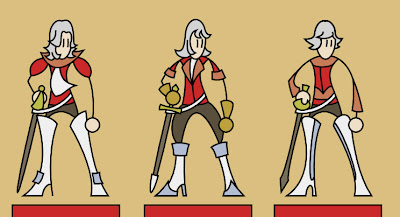 The leftmost one is the original. I began to get an inkling of a potential purpose for these vector characters while I was making her, and this potential purpose would benefit from more mileage from each individual character. Simple colour changes are boring; I wanted to try out model variants too. And so Ms Beta and Ms Gamma were created to stand alongside Ms Alpha.

For more potential variety, the torsos, legs and heads can all be shuffled about. I suppose the swords can too, but they're not obviously different to a casual glance (grey stick with gold handle) and are probably better off bundled in with the head or the torso option. Anyway - that's potentially nine different lineart combinations. Plus colour options. Which is alright.

Speaking of colour options, I'm sure you also noticed that they all used the same palette. You're a sharp one. That was experiment number three - trying to see if I could carry the same scheme across multiple models. Didn't work out so well. I mean, this particular picture looks ok, but fiddling about with it didn't yield much success with other schemes. Which means if I'll probably want to compose individual colour schemes for variants rather than using some kind of systematic method with equivalent-colour areas like I did here.

I might even have to make the heads fixed parts of the variant rather than dynamically swappable. Its the hands that are the problem - if I change the colour of the face, the hands need to change colour too. Which wouldn't be big a problem - I could just bundle the hands (and the sword for that matter) as part of the head "layer" and slap it on top of the body. Except that Ms Beta is wearing gloves. This is the point where I recognise that dynamic part-swapping is something to be considered after I know what limitations I have to work with. I shelve my grand designs for now.

Also I was testing the look of flat block fills. My thinking is that they look best where there are lots of small areas (Ms Beta) and less so otherwise (Ms Gamma). So I'll probably want to use some kind of shading or other texture to the colour, but nothing so complicated that it doesn't work on small areas too.

Oh - I feel the need to apologise for the high heels. They're pretty silly for any kind of swashbucklery/musketeer type character, but they really sell the pose to me. I think I can be forgiven this little bit of genre silliness, but still, it bothers me. I promise that that's the worst example of sex-specific silliness I've indulged in and I hope that it's not too greivous a sin.
Posted by Lorc at 9:38 pm