By some coincidence, I've not done any magicy-types since I started drawing these guys in triplicate. That run has been interrupted.

I labeled these guys "instructors" for want of a better name. And because something about them makes me think "magic school". That could be an explorable new theme, or they could just as well be generic hero-types.

The poses are pretty boring - facing the camera and largely symmetrical - but I like them enough to ignore that. The high-collared cloaks please me. Really, that was the hook for the initial sketch and I'm glad i could reproduce it for the final linework. The scepters with floaty elements too - I like free-floating parts for magical implements. It's a nice simple thing I can do that adds a lot of interest. Also the hair on #1 and #2. #1's a new way of drawing hair that I experimented with; wispy and messy. I do not dislike it. And #2's silly old man hair worked out nicer than I'd hoped with a very low nodecount.

If I do decide that these are going to be magic school instructors, I'd probably re-colour them to make the cloak look like a uniform. In fact with a large enough pool of magic school characters, I could use multiple colour themes and divide them into houses. That could be cool. Something to think about if I go down that route. But like I said they could also be generics. Robed wizards in general are seldom heavily themed. Like this next batch:

Again, they could be part of the magic school (wand studies perhaps?) or generics. Note the floaty bits on the wands again. 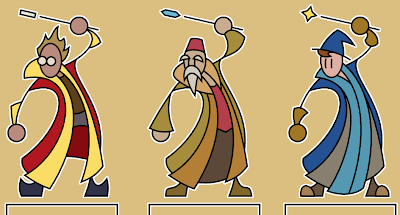 Way back when I started playing with these not-really-stick figures, I came up with a nice way to do wands with a minimal line count. Just a straight line, with a break in it near the top to indicate the white part. I didn't use it for these guys since I wanted to emphasise the wands a bit more, but it'd be good on figures where the wand is incidental or secondary.

Not that I went all out on these wands. What is that, a marshmallow? Then some kind of crystal and a cliché star. The magic school approach would at least justify a lot of cliché. #3's hat for example.

One characteristic of robed wizards is that it's tricky to come up with meaningful variations for the main body without totally wrecking what made the original cool to me. See, they tend to be all one big shape. That's why the three here all have the same, err, don't have the words... "swooshy bits", down the front from the collar. Also, if I do come up with meaningful variation, it has to be swapped out all as one piece. So if I tried to swap parts between these guys, I'd treat the arms and body separately, so any of the robe styles could have sleeves, cuffs or gloves. Probably the shoes too, just to try and break pattern. Now that i look at them again, I wonder if I could swap hats/hair independent of heads... #3's lock might overlap #2's eyebrows in a less-than-attractive way though.

Oh yeah - #2! I want to point out that he's sporting an unprecedented new feature - eyebrows! I don't think I've done those elsewhere. The odd frown line, yes. But not distinct eyebrows. I think. Unless I did them on that old calligrapher or the minister of thamaturgy... I'm going to go check.

Nope! No eyebrows in the archives. This is a bold new advance in veep technology.
Posted by Lorc at 11:10 am