Generic dock toughs. They should fit nicely alongside the various sea cultists and mutants in the corrupt port town. Not exactly in line with my plans, but then little ever is.

I think it's the swaggering pose that sells them. They're also nice and simple in the design - a return to form. The lines of the jacket are a bit clumsy still, but you wouldn't know from the final output.

#1 had concerns. His cutlass hilt was a trial and I'm still not happy with it. His hat is fine on its own, but when colouring him any bright colours made him look like a YMCA member. It's probably the bare chest that does it.

Hmm - speaking of bare chests, I've just realised that #1's sling-strap-thing and #3's scar run the same direction. I should probably flip one of them so that it doesn't look like a pattern. #3, most likely, since now that I think about it that kind of scar would likely go top right to lower left, if inflicted by a right-handed opponent. 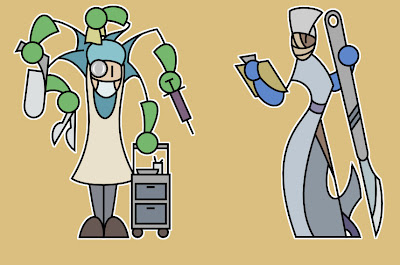 I also returned to the hospital of horrors. No variants though - I think these are the "boss monsters" of the area. Graft-spiderman's skeleton is too distinctive to reskin and I can't come up with any worthwhile ideas for scalpelwoman.

Spider-guy's really loaded for bear. Bonesaw, scalpels, syringe, trolley, even a cloth for his brow! A surgical genius who decided he could do so much better with an extra pair of hands.

Scalpelina's something I promised I wouldn't so. Leggy woman in heels. I tried so hard to avoid the sexy nurse cliché, but the sketch just... happened. And I liked it. I'm still wavering over whether she's too long and spindly, the leg is a little unconvincing and the swoosh of the coat is bizarre. But nevertheless, I like. At least she's flat-chested. Maybe I'll come back to her tomorrow and, with the benefit of fresh eyes, despair over the anatomy and start over.

Still, I can overlook dumbsexy a little for the sake of a boss character. And I do really like the pose with the scalpel and clipboard. If Dr Spider is the frothing nutjob, she's the obsessive badass. They could each support their own staff, or combine forces in the same hospital. Who can tell. She was originally going to have a fuckoff hypodermic, but that was harder to look cool than I expected. Happier with the scalpel.
Posted by Lorc at 9:30 pm