I am annoyed right now. In making those hue-shifts, I managed to save and close the .psd file after I'd flattened most of it.Meaning I lost my layer distinctions. 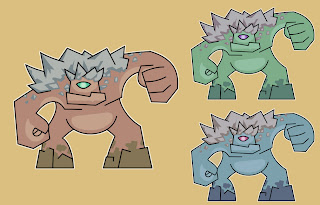 Still, if I ever came back to that step I'd probably want to redo it from scratch, so no call for getting hot and bothered.

Obviously this is another Cyclops. Original colour scheme is ruddy and earthen like the others, but the blue and green versions look so nice and vivid. Also more obviously creatures with rocky bits rather than earth elementals. Damnit I don't want to abuse hue shifts for variants but sometimes it's unfair to make me choose between them.

His designated features are the stony crown and back. Hence the name Cragspine (oh hey look, I've given up on annoying novelty titles for my posts). His feet are earthen rather than rocky and serve to connect him (visually) with his environment. I've already used the word crag for another Cyclops so I'll probably biddle one or the other. Placeholder name. I can cope.

I did a few things differently here: I'm relying on colouring to add detail rather than the linework, most visible on the feet. I'm happier with the light patches of hide too. I feel that I could go back to the other Cyclops and use a few of these tricks to really improve their look.

Criticisms: The rocky back is probably over-detailed (colour not linework). Those fists are anatomically questionable. I think the head might be in the wrong place relative to the pecs and shoulders. That jaw looks like a 3/4 view of a straight jaw, rather than an uneven jawline.
Posted by Lorc at 7:58 pm